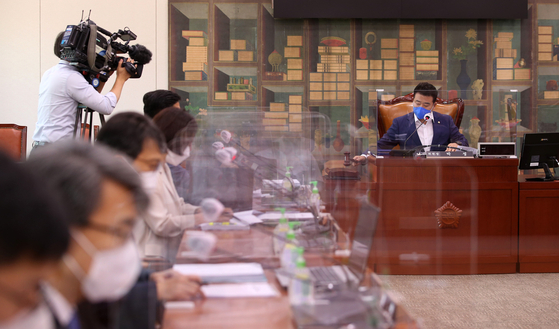 The Legislative Subcommittee of the Culture, Sports and Tourism Committee of the National Assembly on Tuesday deliberate revision proposals for the law governing the press arbitration process. The subcommittee passed a revision bill, sponsored by the ruling party, to introduce major changes which include requiring media to pay higher punitive damages to a victim of fake news. [NEWS1]


Press associations decried the ruling party’s plan to push forward a controversial media reform bill, calling the intended changes an attempt to gag the press critical of the party and the administration in the months before the presidential election.

Five media associations including the Korean Association of Newspapers, Korea News Editors’ Association and Journalists Association of Korea issued a joint statement on Wednesday condemning the ruling Democratic Party (DP) for having used its majority to pass a bill at a subcommittee to revise the law governing the press arbitration process.

The associations said they will start a constitutional lawsuit to stop the changes.

“The changed law will be an evil, anti-democratic law that directly challenges the constitutional value of freedom of expression,” the associations said in the statement. “We see the revision as an attempt to fundamentally gag the press from making critical reports toward politicians and government policies ahead of the presidential election [in March 2022].”

The Culture, Sports and Tourism Committee of the National Assembly held a legislation review subcommittee on Tuesday and passed a DP-sponsored bill to revise the Act on Press Arbitration and Remedies, etc. for Damage Caused by Press Reports. The bill was passed after six hours of debate.

According to the PPP members on the subcommittee, Reps. Lee Dal-gon and Choi Hyung-du, Chairman Park Jeung, a DP lawmaker, did not present the specific revision bill before the voting. While Lee and Choi said it is unlawful for Park to hold a voting on a bill which they had not seen, Park said the bill was a combination of 16 bills previously proposed by the DP and discussed at the subcommittee.

“They said we passed the bill without presenting it to them, but I have told them clearly that the head specialist [of the Culture, Sports and Tourism Committee] would compile what we discussed for six hours and make a draft version,” Park said.

One hour after the subcommittee vote, the DP made public some specifics of the revision bill.

When a member of the media intentionally or accidentally causes damage with a false or deceptive report, it must compensate up to five times the amount of the damage it caused, the bill said.

The bill also allows a media company to seek reimbursement from the reporter of the story under scrutiny if the reporter deceived the company or a supervisor.

According to the revision bill, a reader will be given the right to demand a media outlet take down an online report if it is deemed untrue.

A correction of a report must be the same length or time as the original, the bill said.


The DP said the bill will be submitted to a voting session in August, vowing to use its majority to pass it. “This is just the first step toward reforming the media to protect the people from damages incurred by fake news and creating a fair media industry,” Rep. Yun Ho-jung, floor leader of the DP, said.

The bill still needs to pass the Culture, Sports and Tourism Committee and Legislation and Judiciary Committee before advancing to the voting session.

The main opposition PPP condemned the DP for trying to railroad the bill.

“The DP wants to label any critical report as fake news and seek punitive damages for them,” Chairman Lee Jun-seok said during the Supreme Council meeting on Thursday.

Rep. Hwangbo Seung-hee, spokeswoman of the PPP, issued a statement demanding a response from President Moon Jae-in. “He used to pretend like he was the defender of press freedom, but his party is now pushing forward a bill to gag the press and stop any critical reports. This is destruction of democracy,” she said.

She also said the administration and the DP have taken power from the state prosecution and the judiciary while abusing the ruling party’s majority in the legislature to pass all the bills they want. “Now, they are trying to control the media,” she said.