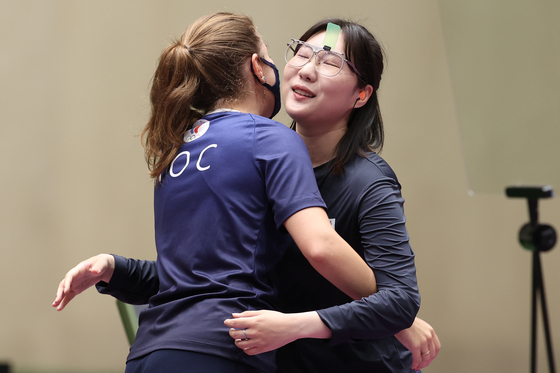 Vitalina Batsarashkina (left) and Kim Min-jung hug after the women's 25-meter pistol final during the shooting event at the 2020 Olympic at Asaka Shooting Range on Friday. [TASS/YONHAP]


Kim Min-jung won silver in the 25-meter pistol women's final of the 2020 Tokyo Olympics on Friday, played at the Asaka Shooting Range, after a tense match that went all the way to a medal-deciding shoot-off.


The day started off perfectly for Kim, who landed all 14 of her 14 shots in the first stage and started off the elimination stage solidly in first place.

At the beginning of the second stage, however, Kim's concentration seemed to falter a bit and she could only add two points each in the first two series, allowing Russia's Vitalina Batsarashkina to join her at the front of the pack.

Kim then rallied to miss only one shot each in her next five series, but Batsarashkina stayed just as sharp and matched her number until the end, taking the game to a shoot-off.

In the shoot-off, Batsarashkina claimed her second gold medal of the tournament by landing four shots to Kim's one.

BTS's RM to recruit 200 fans to appear in promotional video