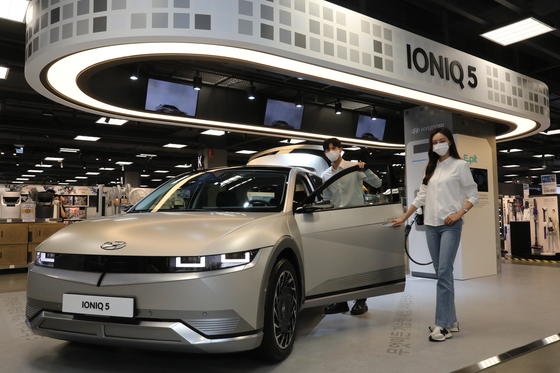 Men in their 50s living in the greater Seoul area are the biggest buyers of Hyundai Motor’s all-electric Ioniq 5, according to data analysis from the carmaker based on 5,700 units of the model delivered so far.

Consumers in their 50s accounted for 31.1 percent of the delivered units, followed by those in their 40s and those over 60 years old.

“Age demographics for those who purchased the Ioniq 5 didn’t differ much from that of internal combustion engine vehicles,” the carmaker said.

“It means that people who are more familiar with the internal combustion engine vehicles naturally moved to buy electric vehicles (EV).”

Males accounted for 75 percent of the delivered units.

By region, consumers in the greater Seoul area, including Seoul, Gyeonggi and Incheon, accounted for 32.8 percent of delivered units. Those living in Gyeonsang, Busan, Daegu and Ulsan came in second at 28.4 percent.

“Demands were high in areas where there is enough infrastructure for charging,” Hyundai Motor said in a release.

There are some 29,000 EV chargers in Seoul and 19,000 in Gyeongsang Provice, Busan, Daegu and Ulsan combined.