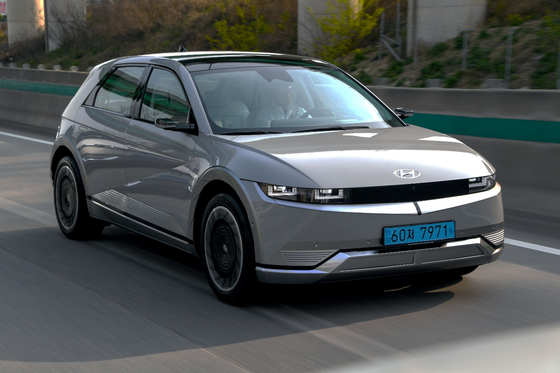 Like most electric vehicle (EV) introduced to the world, the big ambition of Hyundai Motor’s Ioniq 5 is to topple Tesla from the throne and become king of the EV market.

With its futuristic design and a dozen “industry’s first” technologies, the Ioniq 5 certainly has a lot going for it.

The Korea JoongAng Daily recently got behind the wheel of a long-range version of the Ioniq 5 equipped with a rear-drive motor. The model can drive 429 kilometers on a single charge with a maximum output of 160 kilowatts, which translates to 217 horsepower. 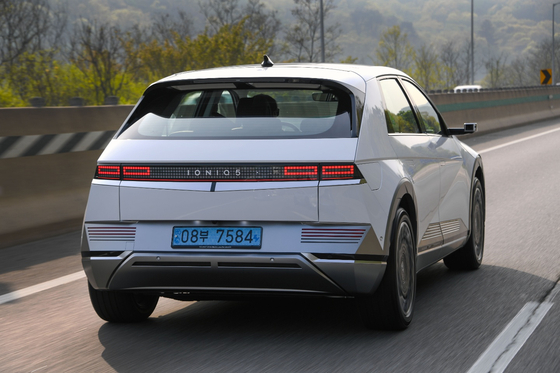 From the front, the Ioniq 5 is instantly recognizable with its signature pixel-inspired headlamps beaming under an elongated hood crowned with a Hyundai Motor logo.

From the side, the 20-inch metallic alloy wheels grab attention with their cogwheel patterns, which add to the Ioniq 5's futuristic feel.

The vehicle’s size is similar to Hyundai Motor’s midsize Tucson. The Ioniq 5 is 4,635 millimeters long and and the Tucson is 4,630. But the Ioniq 5’s lower profile makes it look more compact.

Inside, however, it's a different story altogether.

Thanks to the vehicle’s 3,000-millimeter wheelbase. the distance between the front and back wheels, its interior was equivalent to Hyundai’s Palisade large SUV. In fact, the Ioniq 5 has a longer wheelbase than the Palisade. The flatter floor typical of an EV adds more room.

Once on the road, it became apparent that the Ioniq 5 is the most attention-grabbing car in Korea at the moment. This reporter drove the streets of Seoul in a Tesla Model S in 2018, and was paid less heed.

While waiting for a light, at least three groups of pedestrians stopped and openly stared at the Ioniq 5, and even pointed fingers at it. When I  stopped for a brief charge at a charging station, a passerby entered the station and asked various questions about the vehicle.

In terms of driving performance, the Ioniq 5's character can be summarized in a single word: gentle.

Hyundai Motor is known for the softest suspensions, which suit Korean drivers’ taste for as smooth a ride as possible.

This Ioniq 5 was particularly smooth.

It managed to do away from the abrupt acceleration and braking that many first generation EVs were known for. Acceleration was gradual and braking restrained.

A quiet ride is usually guaranteed in an EV but the sound of this electric motor was audible only once and that was when the vehicle exceeded 100 kilometer per hour.

Most of the ride was done in Eco mode. The other two modes are Sport and Normal.

In Eco mode, the vehicle took some time to gain speed. Once it hit 130 kilometer per hour, it didn’t seem to be able to go any faster.

When switched to Sport mode, the vehicle could go faster, but an audible motor sound and a bit of sway felt in the driver’s seat made the ride a bit less pleasant.

Due to the battery packs fitted beneath the vehicle, the center of gravity felt lower than with internal combustion engines and gave a generally heavy feel, which made cornering at high speed feel risky.

Upgraded technology was evident in every nook and cranny of the vehicle.

Its head-up display, which is projected on the front windshield, has augmented reality visuals showing directional signals in 3D. Side mirrors have been replaced with live camera feeds displayed on dedicated screens on each side of the dashboard.

The moving console in the center allowed for more space in the front seats seat. Sitting in the driver’s seat actually felt more like being in a room than a car.

When the two-hour, 83-kilometer test drive was finished, the vehicle was left with 239 kilometers on its battery. Since we started off with 306 kilometer, about 16 kilometers were saved back to the battery through regenerative braking, which coverts the kinetic energy of the car to electricity. The air conditioner was on for half the trip.

Its electricity efficiency for the trip -- what we used to call mileage --  was 6.8 kilometer per kilowatt-hour, which was considerably better than the official figure of 4.9.

The sticker price for the long-range version of the Ioniq 5 starts from 52 million won. 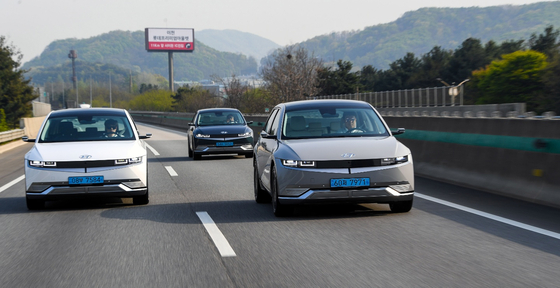