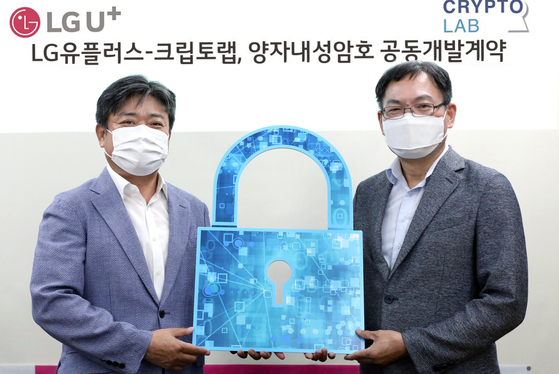 LG U+ Vice President Choi Taek-jin, left, stands with Cheon Jung-hee, founder and CEO of cryptographic company CryptoLab, holding a lock-shaped prop after signing an investment deal on Sunday. LG U+ will invest in CryptoLab to build a 5G and 6G network safe from quantum computer attacks, the telecom company said. [LG U+]


LG U+ will invest in local cryptographic company CryptoLab to build a 5G and 6G network safe from quantum computer attacks, the telecom company said on Sunday.

LG U+ said it has purchased a stake in CryptoLab, with the two companies planning to jointly produce quantum encryption systems for its network security. The company did not disclose what percentage of the company it has bought.

Quantum encryptions are necessary to stand against quantum computer hacks, the company said.

“Solving the impossible in a few hours of computing time” is possible for a quantum computer and there already exists a quantum algorithm to break into widely-used encryption systems called “Shor’s algorithm,” according to a report by McKinsey Digital released in February last year.

The report speculated that quantum computers will be commercialized by 2030.

In addition, it will also develop technology for fourth-generation Fully Homomorphic Encryption (FHE), a crucial technology in utilizing big data. FHE allows users to encrypt their data so that it remains confidential while it is processed.

“CryptoLab’s excellent cryptographic technology will play a key role in fortifying the security levels for LG U+’s networks and services,” said Choi Taek-jin, vice president of LG U+. “We will give all our efforts to build a security system where our customers feel safe.”

CrytoLab was founded by Cheon Jung-hee, the director of Seoul National University’s Industrial & Mathematics Data Analytics Research Center, who received his Ph.D. in number theory and cryptography from the Korea Advanced Institute of Science and Technology.