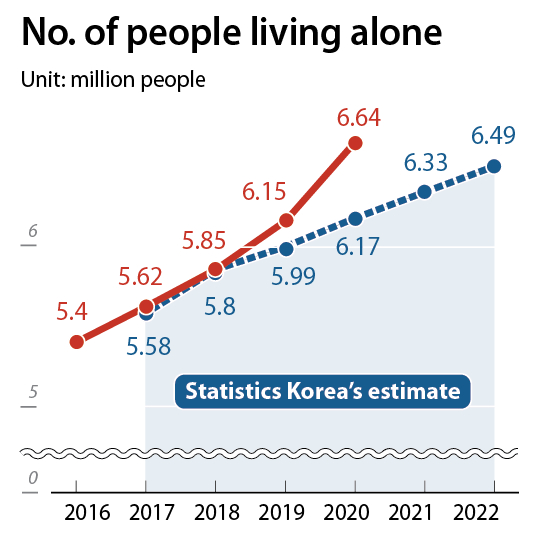 Nearly one-third of all households are just one person, according to a Statistics Korea report.

Statistics Korea said in its previous report that the number of people living alone would reach 6.17 million in 2020, and 6.64 million in 2023.

“When we released the data previously, we estimated that the number of single-person households would rise further. But it seems like the actual number is rising more rapidly,” said a spokesperson for Statistics Korea.

“There are many complex reasons, but it seems like the skyrocketing real estate prices is the biggest reason behind the recent surge in the number of people living alone,” said Kim Yoon-tae, sociology professor at Korea University’s Sejong Campus. “Now, it is far more difficult for young people to purchase properties and get married without financial support from their parents.”

Kim added, “some young people choose to live alone in order to receive some benefits from the government” and this might be the another reason behind the recent rise in the number of single-person households.

Marriage is an important factor that has a direct influence on country’s population. Fewer marriages mean fewer births.

“We have been postponing marriage as it is not possible for us to get an apartment ourselves,” said a 33-year-old man, an office worker in Suwon, Gyeonggi.

He has promised to get married with his girlfriend but cannot map out specific plans due to the high prices of properties.

"Our monthly salaries are just so insufficient for the surging real estate properties and increasing jeonse long-term deposit rent prices," he added.

Only 30.6 percent of people living alone owned their residences as of 2019, according to data from the Ministry of Land, Infrastructure and Transport. About 47.3 percent lived in monthly rental, while some 15.8 percent lived in jeonse apartments.

“The government should come up with measures after clearly analyzing the reason why the number of single-person households is increasing instead of some short-term measures like paying one-million-won grants to encourage them to give birth,” said professor Kim.

“As the number of people living alone is on the rise, the government strengthened public housing projects that aim to offer them more one-room apartments. But this kind of policy is no different with telling them to stay at their current situations,” Kwon said. “The government should implement measures that can actually help people raising their kids, and financially support those who are currently living alone to purchase properties when they get married.”