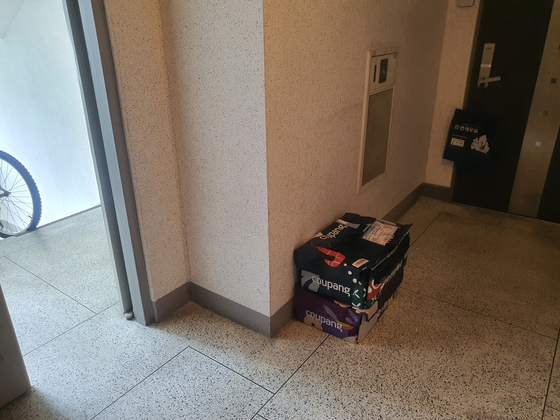 
Coupang is good at fast delivery — but not so good at picking up.


The e-commerce company introduced reusable "Fresh Bags" to help the environment, dispatching orders in reusable delivery bags. Despite such laudable green intentions, delivery workers complain that picking up the reusable bags is a hassle, and customers are irked by the slow collection process.

Ms. Choi, a 41-year-old living in Yongin, Gyeonggi, has had two Coupang Fresh Bags sitting on her doorstep for two weeks.

“I even got a call from the security office saying I needed to move the Fresh Bags because they were getting in the way of the apartment cleaners,” said Choi. “I chose to get my orders in Fresh Bags to reduce waste even though I could have chosen a cardboard box. It’s such a nuisance!”

When you order groceries from Coupang and choose same-day Rocket Fresh delivery, you get a choice of packaging: a normal cardboard box or a reusable, insulated Fresh Bag, which despite the name, looks like a 12-kilogram (26 pound) padded box. Coupang promises that delivery guys will come back to collect the bag — but it doesn't say when.

Coupang delivery workers say taking back the Fresh Bags is too much hassle. Delivery workers usually carry all packages needed to be delivered to one apartment building on a small trolley, and there's no space to pile up the bulky, reusable bags.

And don't forget these guys hustle: they have to hurry to deliver groceries within the same day.

“We have to move fast, saving every minute,” said one of Coupang’s delivery drivers, who asked not to be named. "We just don't have time for the Fresh Bags."

Coupang’s same-day delivery has been well-received by customers — at a deadly cost. Since March 2020, Coupang has suffered nine delivery worker deaths, the first for the company. Although the company has only acknowledged two to be work-related, labor unions such as the Korean Public Service and Transport Workers’ Union claim all of the deaths to be caused by overwork.

In response to rising complaints, Coupang is working on faster pickup of the bags, with a two-week test program running this month. The program has a complicated set of incentives. Delivery guys are promised that if they collect a Fresh Bag from an address they're going to anyway — because a new Coupang order is being delivered there — they get a 100 won (9 cents) incentive.

If they have to make a special trip to pick up a Fresh Bag, the incentive is 200 won.

“We’re going to proceed with the incentive program until Aug. 14, and see the overall collection rate of Fresh Bags,” said a spokesperson for Coupang, "to decide whether we're going to adapt the program or come up with another plan."

Coupang is trying to improve the situation for both delivery workers and customers, but real progress has to yet to be seen in Yongin. Despite the plan introduced July 30, Ms. Choi is still waiting to see her doorstep clear of its two Fresh Bags.

“I ordered from Coupang’s Rocket Fresh delivery six times during the last two weeks, but they just leave new deliveries at my door and don’t take back the Fresh Bags,” said Choi.