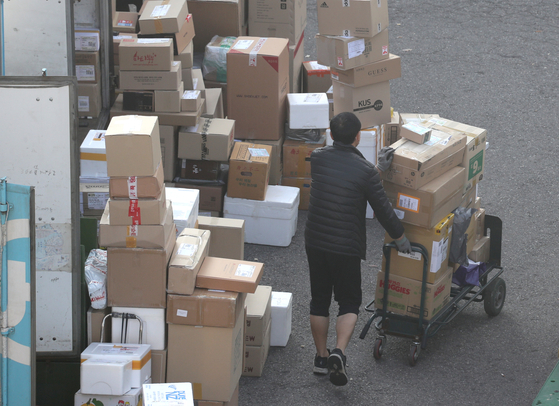 A delivery worker works at a distribution center in Seoul on Tuesday. [NEWS1]


With a number of delivery workers dying in recent weeks, President Moon Jae-in on Tuesday urged government officials to come up with a measure to take the pressure off of logistics company workers.

It is not clear whether the deaths were in any way related to the actual work. What is clear is that delivery workers have been busy, some have been under stress and they have been passing away at much higher rates this year than in previous years.

On Oct. 12, a 36-year-old Hanjin Transportation delivery worker was found dead in his home. This came four days after a CJ Logistics delivery worker died after experiencing respiratory difficulty while he was working in a distribution center.

Taekbae Union, which represents delivery workers, on Oct. 18 disclosed a text message from the Hanjin Transportation employee in which he detailed the working conditions.

“I’m on my way home now, and it’ll be around 5 a.m. when I arrive home,” he wrote. “As soon as I wash up and eat, I have to go to the terminal right away to sort parcels. Yesterday, I arrived home from work at around 2 a.m. I’m so exhausted.”

According to the union, the worker was in charge of as many as 400 deliveries a day.

On the same day, a worker in his 20s who works at a Coupang distribution center in Chilgok County, North Gyeongsang, was found dead in his home at around 6 a.m.

According to a task force team formed to support Covid-19 victims at Coupang distribution center, the young man had no chronic diseases and he was neither a smoker nor a drinker.

The recent increase in deaths may be connected to the surge in online orders as a result of the pandemic. Total packages delivered increased 20 percent on year from January to August, according to a report by the Ministry of Land and Transport.

The number of packages delivered in June hit 293.4 million, which is up 36.3 percent compared to the same period a year earlier. 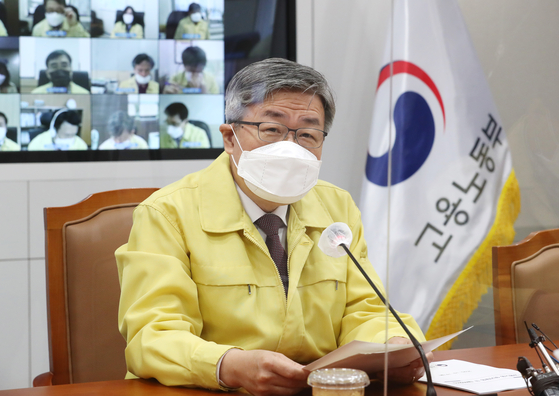 Employment and Labor Minister Lee Jae-kap speaks at a task force meeting which was held at the government complex in Sejong on Monday. [YONHAP]

The Ministry of Employment and Labor on Monday held a task force meeting and decided to conduct an emergency inspection of major logistics companies, including CJ Logistics and Hanjin Transportation, to check whether they are following safety measures, especially the prevention of overwork.

The inspection will run from Oct. 21 through Nov. 13 at 40 major terminals and some 400 branches of logistics companies.

The ministry also said it plans to speak with some 6,000 delivery workers.

“I feel sorry for the delivery workers who lost their lives due to the excessive workload,” Employment and Labor Minister Lee Jae-kap said. “We will thoroughly inspect companies and branches on whether they abide by the safety rules on their employees. Those who violated the law will be dealt with in accordance with the law.”