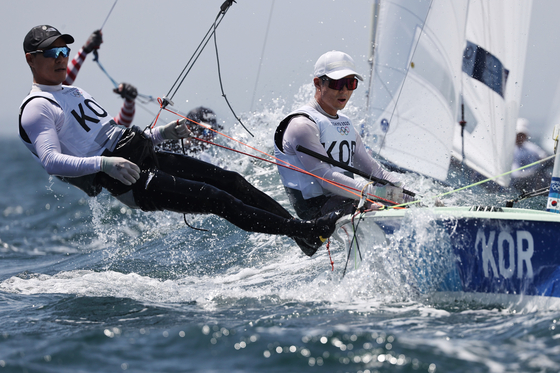 
Park Gun-woo and Cho Sung-min's journey in the men's 470 event of the 2020 Tokyo Olympics ended without a medal on Tuesday, but with real glimpses of hope for Korean sailing's future.

The duo failed to qualify for the medal race, as only the top 10 out of the 19 teams participating advance to the final day. Teams were ranked by the point total they aggregated over the 10 preliminary races, minus their worst race. Park and Cho finished 14th.

Park and Cho did struggle in more than half of their races in Tokyo, usually coming in somewhere between 14th and 17th.

Their performances on Tuesday, however, will allow them to leave Enoshima Yacht Harbour proud. In the ninth race, they actually managed to come in first, and in their final, tenth race, they finished ninth.

Viewers tuning into the men's 470 suffered some confusion during the tenth race, in which Park and Cho seemingly disappeared — the official Olympics page, which updates race records in real time, left all spaces blank for Korea, raising fears that they had somehow been disqualified.

After the race, the Korea Sailing Federation told the Korea JoongAng Daily that the two sailors had merely forgotten to turn their GPS device on during the tenth race, and the match had ended without any other issues.

Park and Cho's overall placing is an improvement upon Rio 2016, in which Korea finished 19th out of 26 teams.