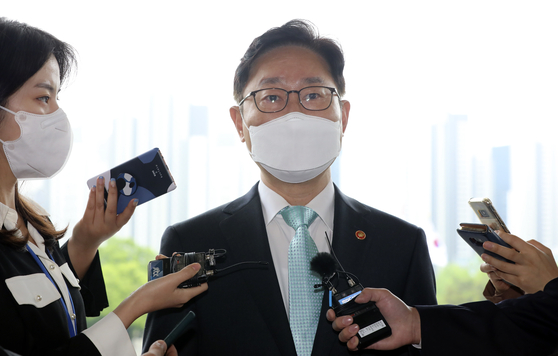 
Justice Minister Park Beom-kye has ordered an investigation to find out who leaked the indictment paper against a top prosecutor to media, following reports citing the document that say key members of the administration had committed obstruction of justice.

Park issued an order to Acting Prosecutor General Cho Nam-kwan on Friday to investigate how journalists were able to get their hands on the paper of Lee Sung-yoon, head of the Seoul Central District Prosecutors’ Office. Lee was indicted on May 12 on charges of pressuring prosecutors to drop an investigation in 2019 into an illegal travel ban against Kim Hak-eui, former vice minister of justice. 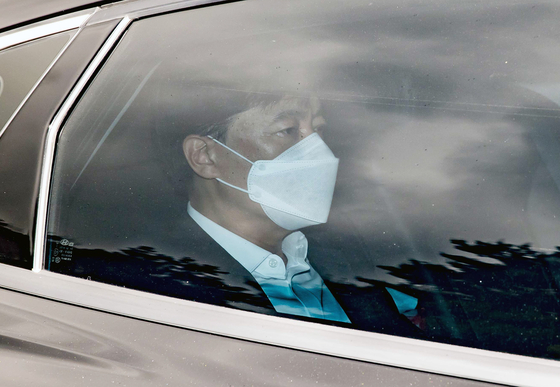 
The Suwon District Prosecutors’ Office concluded that the Ministry of Justice had circumvented the law in 2019 when it issued an overseas travel ban on Kim in order to probe allegations that he took bribes and sexual favors arranged by businessmen from 2006 to 2009.

At the time, the Anyang Branch of the Suwon District Prosecutors' Office noticed that the travel ban appeared to be illegal. When Anyang Branch prosecutors tried to investigate, members of the Supreme Prosecutors’ Office, including Lee, allegedly pressured them to drop the case.

After Suwon prosecutors filed the indictment against Lee, a 16-page indictment paper was automatically uploaded on the internal network of the prosecution. About 2,000 prosecutors nationwide have access to the system.

The following day, the JoongAng Ilbo ran an exclusive report on details from the indictment paper. According to the report, not only Lee but also Cho Kuk, then-senior presidential secretary for civil affairs, and Park Sang-ki, then-minister of justice, had also pressured the Anyang prosecutors to drop the case.

Cho denied the report on Thursday.

Though Justice Minister Park Beom-kye said it is illegal to leak the indictment paper to the press and ordered a probe, there is no law barring the prosecution from making public the charges against a criminal suspect after an indictment is filed.

Article 126 of the Criminal Act only bars investigative authorities such as prosecution and police from making public a suspect’s charges before he or she is indicted for a trial. Making public suspected charges of a criminal case is punishable by up to three years of imprisonment. 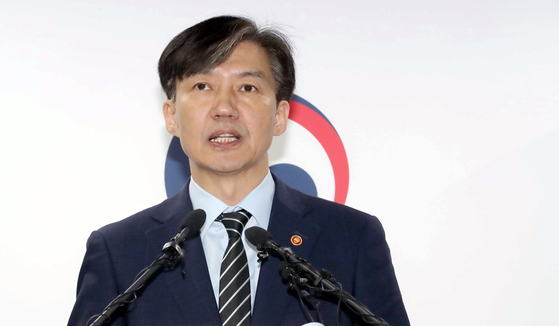 
Although the press guidelines said the indictment papers should not be released, to protect human rights and privacy of the accused, the conspicuous timing led to much criticism. The guidelines were issued when the prosecutors were investigating Cho and his family for alleged corruption and academic fraud, and media and law experts had complained that Cho was trying to gag the prosecution and press.

Justice Minister Park said Monday that he ordered the investigation in order to guarantee a fair trial to Lee. Park admitted that there is no law that bars the prosecution from releasing the indictment paper after an indictment was filed, but the leak could have violated Lee’s privacy.

Members of the legal community echoed that no law was breached when the media quoted the indictment paper because it was already submitted to the Seoul Central District Court as a public record.

They also said Lee, as the head of the Seoul prosecution, is a public figure and the press has a right to report about his indictment paper.

Rep. Kim Do-eup of the main opposition People Power Party, and a former prosecutor, also criticized Justice Minister Park for having ordering an investigation into the leak.

“Cho and his successors Choo Mi-ae and Park are all using it as grounds to conceal the crimes committed by key members of the Moon Jae-in administration. By doing so, they are violating the people’s right to know,” Kim said.

Kim also criticized Park’s double standards, pointing out that Park, when he was an opposition lawmaker, had demanded that the progress of the prosecution’s investigation into the presidential scandal of Park Geun-hye and her friend Choi Soon-sil be made public real time.