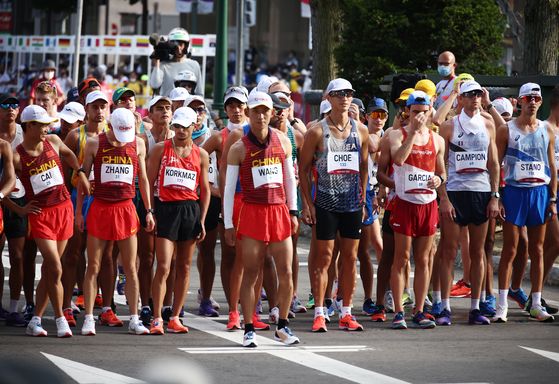 
Men's 20-kilometer race walker Choe Byeong-kwang's journey at the 2020 Tokyo Olympics came to a close without a medal at Sapporo Odori Park in Sapporo, on Thursday evening.

Choe came in 37th, at 1:28:12. He had a relatively uneventful race, hovering between 30th and 40th place through most of the 20 kilometers while collecting no violations.

A total of 52 athletes completed the race. Five were either disqualified or could not finish.

Choe may be somewhat unsatisfied with his 37th-place finish, but considering he ranks at No. 47 in the world, it could be considered roughly par for the course. He had not been expected to medal: A number of competitors had better season records than his personal all-time best of 1:20:40.

The veteran will still be proud to be the only race walker from Korea to have made it to every major international tournament in recent years. He has participated in all three World Athletics Championships — Beijing 2015, London 2017, Doha 2019 — and both Olympics — Rio 2016, Tokyo 2020 — held since 2015.

Choe's performance on Thursday was also an improvement upon his placing at Rio 2016, where he came in at 1:29:08 to finish 57th.