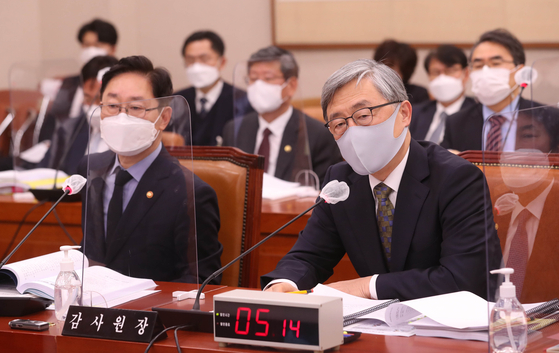 Choe Jae-hyeong, chairman of the Board of Audit and Inspection, right, speaks at the National Assembly's Legislation and Judiciary Committee on Monday. [YONHAP]


The head of the nation's supreme audit institution on Monday refuted the ruling party's argument that public servants should be given leeway in implementing the president's campaign pledge.

"I cannot agree with the statement that civil servants' administrative activities cannot be judged by laws," Choe Jae-hyeong, chairman of the Board of Audit and Inspection (BAI), said during a hearing of the Legislation and Judiciary Committee of the National Assembly.

Choe was responding to Rep. Park Sung-joon of the ruling Democratic Party (DP), who complained about the BAI's probe into the Moon Jae-in administration's decision to shut down the country's second-oldest nuclear reactor, the Wolsong-1, earlier than scheduled. "When the BAI investigates a policy and applies the laws, the public servants will have no room to maneuver," Park told Choe.

"A public servant's administrative action must be transparent and follow the procedure as stipulated by the law," Choe said. "I want to believe that Park was not saying that it is okay to not be transparent, so I won't discuss this issue any further."

Choe said he agrees that a president's campaign pledges and policies must be implemented properly. "But I believe [Park is] not saying it is okay to implement the policies regardless of means and method. Are you?"

Ever since the BAI announced its audit outcome in October last year that the Moon administration made a decision to shut down the Wolsong-1 nuclear reactor earlier than scheduled based on a faulty economic assessment report, the DP has attacked the watchdog by saying that it has carried out a political probe to examine the legitimacy of Moon's nuclear phase-out policy.

"Shutting down the Wolsong-1 reactor was Moon's presidential campaign pledge, and it was a policy endorsed by the people through the election. Auditing or investigating the policy to shut down the reactor is a direct challenge to democracy," Rep. Youn Kun-young of the DP, a longtime associate of Moon, wrote in a Facebook post in November.

After announcing the audit outcome in October, the BAI handed over its investigation records to the prosecution. One of the findings showed that then-Energy Minister Paik Un-gyu had abused his power to pressure Korea Hydro and Nuclear Power to shut down the reactor. Another finding was that Energy Ministry officials had deleted government documents on the reactor shutdown decision before the audit.

The prosecution is currently investigating whether Paik and other key members of the administration had abused their power to prematurely shut down the reactor, possibly to placate Moon's nuclear phase-out policy.

Rep. So Byung-chul of the DP also asked Choe on Monday if all commissioners of the BAI Council had agreed to send the Wolsong-1 audit data to the prosecution.

"No one raised an objection," Choe responded. "And I have no opposition to make public the minutes of the council meeting."

The BAI is currently conducting a separate but related investigation into Moon's controversial nuclear phase-out policy. The BAI is investigating whether the administration had ignored legitimate policymaking processes while creating its nuclear phase-out blueprint. The outcome is expected to be announced next month.

The probe was requested by an opposition lawmaker and hundreds of residents near nuclear plants in Ulsan in 2019.

After the BAI announced last month that it will start the probe, Rep. Choi In-ho, senior spokesman of the DP, condemned the watchdog the next day, saying, "The BAI announced that it will audit the government's energy transition policy, and this is a probe going beyond its authority."

The BAI, however, stressed that it is only looking into the procedural legitimacy of the policymaking, not the policy itself.