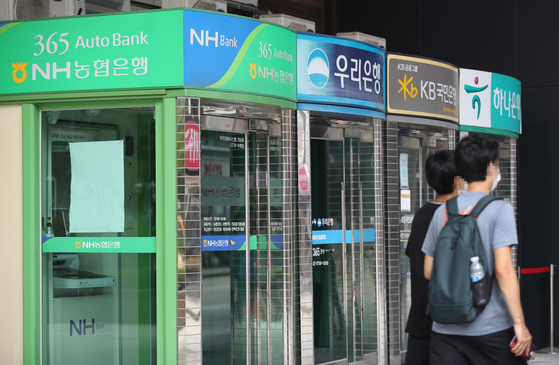 Ms. Joo, an office worker in her 30s, recently bought an apartment in Seoul  -- using her savings, money borrowed from siblings and parents, and, of course, the biggest mortgage she could afford.

“I figured it was now or never,” Joo said. “I regret that I couldn’t make the decision earlier.”

According to the Bank of Korea, household debt reached 1,765 trillion won in the first quarter this year, a 9.6 percent year-on-year increase from last year’s 154 trillion won.

Household debt includes loans from banks, insurers and other private and public lenders as well as mortgages.

Despite strenuous government efforts to curb loans, especially for purchases of real estate, outstanding household lending from five major banks in Korea came to 695.3 trillion won as of end of July, which was 9.5 percent more than a year earlier.

In July alone, 6.2 trillion won was added to that amount, the second biggest monthly increase this year after April's.

Korea’s stats are starting to look alarming when compared to other advanced countries.

According to the Bank for International Settlements (BIS), Korea's household debt-to-GDP ratio reached 103.8 percent as of the end of last year, which was the seventh highest figure among 43 countries followed by the institution.

That ratio was 35 percentage points higher than the 71 percent recorded in 2007, right before Korea was hit by the global economic meltdown.

Even when compared to countries also experiencing spikes in real estate prices, Korea stands out.

Aside from the aggregate amount of debt, households' capacities to pay back is becoming a problem.

The ratio of disposable income to household debt, which is used as a barometer to gauge each household’s capability to handle debt, reached 170 percent, according to the Korea Economic Research Institute in July.

The figure “falls in the very top tier among OECD countries,” the institute wrote in a report.

“That generation  has less financial capability to pay back the loans. If the value of assets they hold fall drastically, it could eventually lead them to go bankrupt.”

A hike in interest rates will be inevitable if such expansion in household debt continues and real estate prices don't settle down.

“The Bank of Korea [BOK] is likely to increase the base rate by 0.25 percentage points to 0.75 percent considering the current financial imbalance,” Woori Finance Research Institute wrote in a report on Aug. 4.

The BOK has kept the country’s base interest rate at a record low 0.5 percent since May 2020.

Household debt measures could be announced next week by FSC