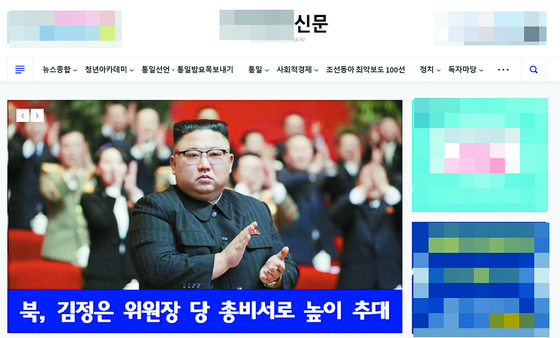 A screenshot of the homepage of the media outlet run by Son, featuring an article praising Kim Jong-un. Son is accused of violating the National Security Act along with three other suspects. [SCREEN CAPTURE]


Four civic activists suspected of having received at least $20,000 from North Korea in 2019 were also discovered to have converted almost $24,800 into won between 2017 and 2018, according to a warrant application filed by police and the National Intelligence Service (NIS) on July 27.

The NIS and the police are conducting a joint investigation into two men and two women on charges of having received orders from the Workers’ Party’s Cultural Exchange Bureau — a North Korean espionage department directed at recruiting and mobilizing South Korean sympathizers of Pyongyang — and staging a series of protests to oppose the South Korean military’s plan to procure U.S.-built stealth fighter jets.

Three of the four activists were taken into custody on Aug. 2, when the Cheongju District Court issued warrants allowing police to detain three of the suspects over their alleged acts of benefiting the enemy, a crime punishable by the National Security Act. The fourth suspect, surnamed Son, remains under investigation without detention.

In the warrant application, the NIS said that not only did one of the suspects in 2019 retrieve $20,000 in cash deposited by North Korean agents in a supermarket locker in Shenyang, northeastern China — which was intended to fund the group’s activities in favor of North Korean interests in South Korea — but the suspect had also previously converted $10,000 into Korean won near Myeongdong Station, subway line No. 4, in central Seoul in June 2018. He again converted $10,300 in the same location in August that year.

Another individual went abroad in May 2017 and converted $2,500 into Korean won upon return to Korea. In June that same year, that individual and Son converted $2,000 together in Pyeongtaek, Gyeonggi.

The conversions attracted suspicion from the NIS that the funds originated from North Korean agents because the suspects did not have stable occupations and yet converted large sums of the U.S. currency in locations in Seoul and Gyeonggi, far away from their places of residence in Cheongju, North Chungcheong.

The suspect who converted money in Myeongdong in 2018 had not recently traveled abroad at the time, leading investigators to believe he had obtained the U.S. currency from someone else who had met with North Korean agents.

In its warrant application, the NIS cited this as further evidence that the group was paid by Pyongyang to establish an underground organization and carry out activities benefiting the communist regime, according to sources informed about an investigation into their alleged National Security Act violations.

The police and the NIS suspected that the North ordered the four activists to organize protests to oppose the procurement project of the F-35A stealth fighter jets. Their inter-Korean exchange projects of sending 1 million seedlings to the North, promoting a return visit by North Korean leader Kim Jong-un and inviting over 500,000 people to create a “human chain” along the 500-kilometer (310-mile) demilitarized zone were also carried out to implement the North’s directives, the investigative authorities said.

In May, the NIS and police raided the activists’ residences and offices in Cheongju, finding USB flash drives containing encrypted files of orders and reports they exchanged with North Korean agents.

From their raid, investigators said they discovered evidence that the four suspects received instructions from members of the Cultural Exchange Bureau to win over politicians, labor and civic group members in the Cheongju area to support their campaign against the purchase of the stealth fighter jets.

For the seedlings project, the suspects appear to have met with senior leaders of the Democratic Party and Korea Council for Reconciliation and Cooperation, investigative authorities said. The lawmakers told the JoongAng Ilbo that they had met with the activists, but they have no information about the ongoing investigation.

Three of the four suspects were also members of a special advisory group on labor issues for Moon’s presidential campaign in 2017. However, reports of their involvement in the body was met by a Blue House response which said they are “not worth mentioning."

Meanwhile, Son said that he and his fellow activists are victims of a political probe and illegal surveillance by state authorities, arguing that their prosecution demonstrates the need to abolish the National Security Act. Son is an operator of an online news media outlet, which has previously published articles praising Kim Jong-un.