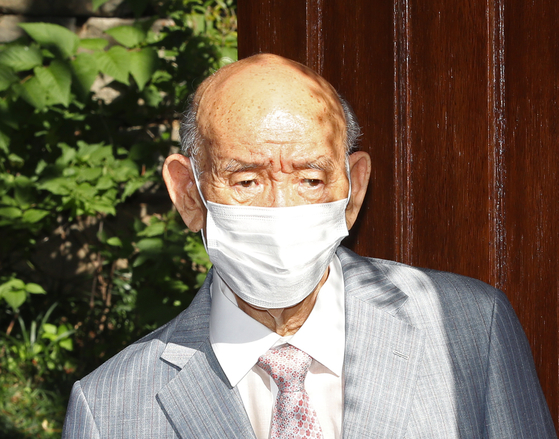 Former President Chun Doo Hwan leaves his home in Seoul on Monday to attend an appeals trial in Gwangju. [YONHAP]


Chun Doo Hwan, Korea’s authoritarian leader in the 1980s, made a rare visit to the southwestern city of Gwangju, where pro-democracy protesters were massacred by his military, to attend an appeals trial for his libel conviction.

Chun, 90, left his home in Seoul in the morning and arrived at Gwangju District Court in the afternoon. His wife, Lee Soon-ja, accompanied him. Chun’s last visit to Gwangju was on Nov. 30, 2020, when the Gwangju District Court found him guilty of defaming a priest who had documented the brutal military crackdown on demonstrators in Gwangju in 1980.

As Chun came out of his house, a group of protesters waiting for him outside shouted their demands for an apology. Chun, however, boarded a car without responding.

About 30 police troops were dispatched to his house to help in the case of a clash. Dozens of reporters also gathered outside.

Chun, who rose to power in a military coup on Dec. 12, 1979, was the country’s president from 1980 to 1988. He was charged with libeling the late Father Cho Pius, a key witness in the Gwangju uprising of May 18 to 27, 1980, which called for democracy and an end to Chun’s junta. Cho, a religious leader and democracy activist who died in 2016, had testified that the military had opened fire on protesters from helicopters during the crackdown. 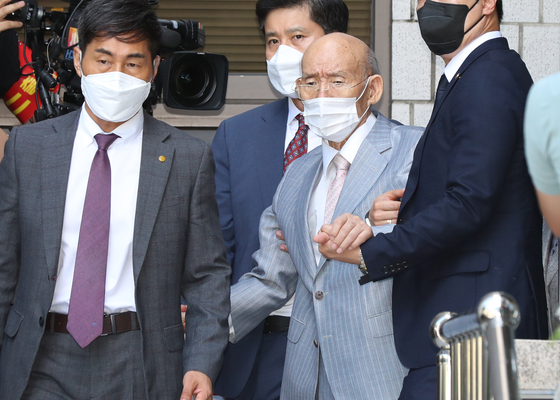 
Chun published a memoir in April 2017 largely defending his authoritarian presidency. Chun called Father Cho a “shameless liar who does not deserve the title of a religious priest” and “Satan wearing a mask” in his book.

Within days of publication, the family of the late priest filed a criminal complaint to the prosecution accusing Chun of defaming the dead, which is a crime in Korea. Chun was indicted by Gwangju prosecutors in 2018.

After attending the initial arraignment in August 2018, Chun skipped subsequent sessions of the trial, citing poor health conditions and claiming that he suffers from Alzheimer’s disease. He made two more appearances in Gwangju including the sentencing at the district court in November last year.

At the time, the court sentenced him to eight months in prison, suspended for two years. The ruling hinged on a determination that there were reasonable grounds to conclude that Chun was aware of the helicopter shootings in the Gwangju uprising.

The prosecution appealed, demanding a stronger punishment. The Gwangju High Court started the appeals trial in February, but Chun failed to show up to the first and second sessions in May and June. 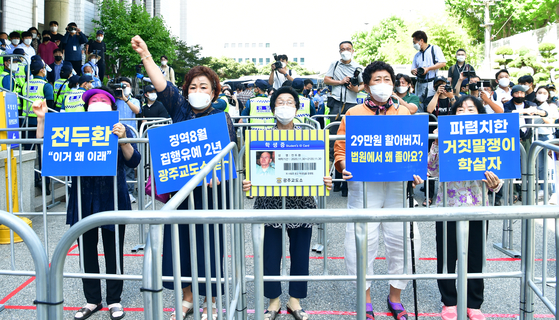 In front of the Gwangju District Court on Monday, a group of women whose relatives or children were killed or injured in the brutal military crackdown on protesters calling for democracy in May 1980 demand severe punishment for Chun Doo Hwan. [YONHAP]


Chun originally told the court that he will not attend the session scheduled for Monday, and the court warned that he could face a disadvantage in areas such as presenting evidence if his absence continues. Chun then decided to attend the trial on Monday.

Chun was prosecuted in 1996 on charges of conspiracy and insurrection to hold him accountable for the Dec. 12, 1979, military coup and the deadly crackdown on the 1980 Gwangju uprising. Although he was initially convicted and sentenced to death, the punishment was later reduced to life imprisonment in appeals trials.

He began serving jail time in April 1997, but his sentence was commuted by President Kim Young-sam in December 1997 on the advice of incoming President Kim Dae-jung, an iconic democracy advocate.