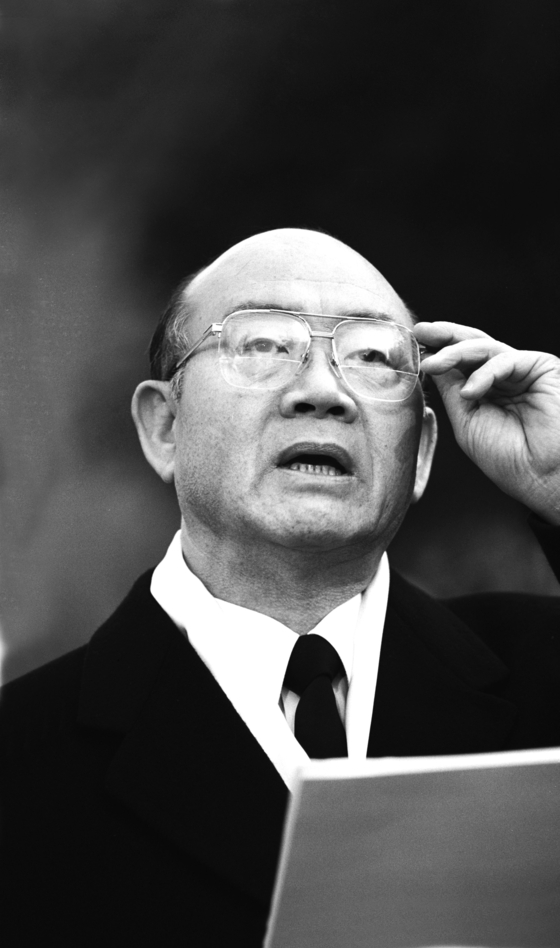 Former President Chun Doo Hwan reads a statement in front of his residence in Yeonhui-dong, Seodaemun District, western Seoul, on Dec. 2, 1995 as he rejected a subpoena by prosecutors and left for his hometown of Hapcheon, South Gyeongsang. Chun died on Tuesday at 90. [JOONGANG PHOTO]


Former president Chun Doo Hwan, who seized power in a coup d’etat in 1979 and ordered a brutal crackdown on pro-democracy protests in Gwangju in May 1980, died Tuesday at the age of 90.

Chun died at approximately 8:40 a.m. at his home in Yeonhui-dong, Seodaemun District, western Seoul, after years of battling multiple myeloma, a form of blood cancer.

Born in 1931 to a peasant family in Hapcheon, South Gyeongsang, Chun entered the Korean Military Academy during the Korean War in 1951, where he met his classmate and later close political ally Roh Tae-woo.

Following military training in the United States, where he studied guerilla tactics and psychological warfare, Chun rose through the ranks, serving as deputy chief of the Blue House security office, commander of the Armed Forces Security Command, 10th chief of the Central Intelligence Department and standing chairman of the National Security Legislative Council. By 1978, Chun had attained the rank of brigadier general in the Army.

Two months after Choi Kyu-hah became president in the aftermath of Park Chung Hee’s October 1979 assassination, Chun mounted a coup d’état. While Choi remained the official president until August 1980, Chun emerged as the real center of power, and in April 1980 he became head of the powerful Korean Central Intelligence Agency.

In the most infamous chapter of his career, Chun declared martial law in May 1980 and then ordered the brutal suppression of demonstrators in Gwangju the same month, which resulted in the deaths of at least 165 people and probably many more.

Choi, who had become little more than a civilian figurehead, announced in August 1980 that he was resigning the presidency. On Aug. 27, the National Conference for Unification, the nation's electoral college, held a vote in which Chun was the sole candidate. He officially became president on Sept. 1, a few days after he retired from the Army with the rank of a four-star general.

Chun’s term in office was marked by several serious incidents involving North Korea, notably an assassination attempt in Myanmar (then called Burma) by North Korean agents in 1983 during a state visit that resulted in the deaths of 17 high-ranking South Korean officials. Chun himself survived because he was delayed arriving at the site.

As president, Chun maintained an iron grip over domestic public opinion and the media while continuing the export-driven economic growth model championed by Park. In a sign of the country’s growing international stature, Seoul was selected in 1981 to host the 1988 Olympics.

Limited to one presidential term by the 1980 constitution, Chun picked Roh to be the candidate of the ruling Democratic Justice Party, an act which led to mass protests demanding direct presidential elections in June 1987. After accepting the protesters' demands, Roh was elected president in a December 1987 election through a direct vote. Chun retired from politics after being succeeded by Roh.

However, Chun was later indicted alongside Roh in December 1995 on charges of accepting bribes during their terms as president amounting to hundreds of millions of dollars. Prosecutors also investigated their involvement in the 1979 coup and the suppression of the Gwangju protests.

Declared guilty on all charges in August 1996, Chun was sentenced to death, which was later reduced to life imprisonment. He received a presidential pardon from Roh’s successor Kim Young-sam in December 1997.

In a 2014 memoir, Chun asked to be buried on an elevated point close to the inter-Korean border so that he could “greet reunification, even if all that remains are [his] bones.”

Former aide Min Jeong-ki said that Chun’s family will hold a private family funeral at Severance Hospital in Seodaemun District, and that his remains will be incinerated afterward.

Unlike Roh, who was given a state funeral in consideration of his apologetic stance towards the military junta’s deadly suppression of the Gwangju protests and his efforts toward inter-Korean reconciliation, Chun never made a public statement of contrition about his brutal rise to power.

The lack of a formal apology from Chun before his death was noted by the Blue House, which offered its condolences but said it would not be sending flowers or a delegation to pay respects to Chun.

“It is unfortunate that former president Chun did not apologize for his part in history,” Blue House spokeswoman Park Kyung-mee said in a press briefing on Tuesday.

The ruling Democratic Party’s presidential candidate Lee Jae-myung did not mince his words about Chun, calling him the “main culprit behind a domestic massacre.”

Lee also corrected a reporter who asked him a question about “former president Chun,” responding, “It is correct to call him Mr. Chun. He was legally stripped of his presidential privileges.”

Party leader Lee Jun-seok said he left it to individual party members and lawmakers to decide whether to pay their respects, while PPP presidential candidate Yoon Seok-youl changed his mind about attending Chun’s funeral within two hours.

After initially suggesting he would attend during a lunchtime meeting by commenting, “Shouldn’t I attend the funeral of a former president?” Yoon changed his stance two hours later, saying he would not be attending after all.

No more slips of the tongue