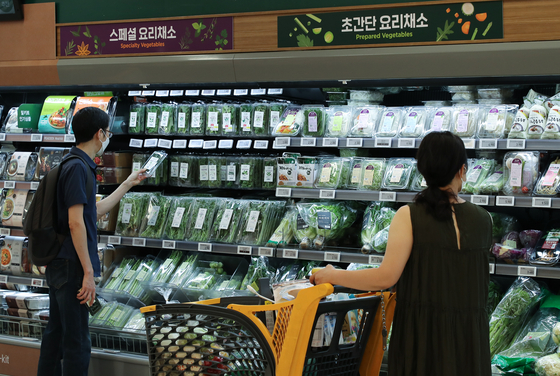 People shop for groceries at a discount mart in Seoul. [YONHAP]

Mrs. Chae, a 42-year-old living in Seongbuk-dong, northern Seoul, went to a discount mart near her neighborhood on Wednesday to buy some spinach. But the high price turned her off and she bought zucchinis and bell peppers instead.

“A bundle of spinach was some 2,000 won ($1.70) last year, but now it’s almost three times more expensive,” said Chae. “Vegetable prices have been rising since last fall and I tend to buy ones that didn’t rise as much.”

Spinach stands out for skyrocketing prices this year. According to the Korea Agro-Fisheries & Food Trade Corporation, the wholesale price of spinach was 39,360 won per 4-kilogram (9 pound) box as of July 27, up 92 percent on year.

Many shoppers are scrambling to find the cheapest ways to put food on the table.

Although it's often said there's no substitute for fresh vegetables, the freezer case proves otherwise, and the prices of frozen vegetables are looking good to customers.

“Frozen vegetables aren’t subject to price fluctuations because they are bought at a cheaper price and can be stored frozen for a long time,” said Lee Sang-hyun, a buyer at Emart. “They are a cheaper option when there is an overall price rise."

Lee added that frozen foods and single-serving groceries are a better choice for small families because they can be stored for a long time and are easy to prepare.

The surge in fresh food prices has made meal kits seem less expensive, and sales surged 215 percent on year.

Fierce competition among retailers that broke out in April has also been benefiting customers.

In April, Emart launched e-money, a program that promised customers that if they found cheaper products at Coupang, Lotte Mart and Homeplus, Emart would refund the difference as loyalty points. Some 2,000 products including milk, ramyeon and snacks were included in the program.

The program had over 710,000 members as of Aug 10. Some 14,500 customers received loyalty point refunds in July, a 222 percent increase from the month before.

"More customers are trying to shop frugally even by a small margin, and [the program] has been beneficial for our discount marts since people can use e-money at our offline stores," said a spokesperson for Emart, referring to customers coming back to use the collected loyalty points.


in April, e-commerce platform Market Kurly also started its Every Day Low Price program, guaranteeing the lowest prices for some 60 food products including milk, bananas, zucchinis and bean sprouts. Sales of the discounted foods between April 1 to July 31 rose 78 percent on year.

Also in April, Lotte Mart announced that it would be awarding five times more loyalty points when customers bought 500 types of food, including milk, ramyeon and kimchi. Some 310,000 new members signed up between April 14 and early August, and the points they earn can be used at Lotte Group stores such as Lotte Mart and Lotte Department Store.

The price of veg