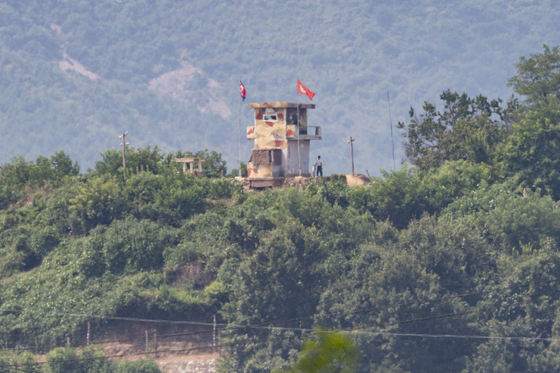 A North Korean soldier is spotted near a guard post on the northern side of the Imjin River, viewed from the border area in Paju, Gyeonggi, as Seoul and Washington kicked off their nine-day summertime military exercise Monday. Pyongyang has remained mum on the joint exercise as of Monday afternoon. [YONHAP]


Seoul and Washington kicked off their summertime military exercise Monday in a scaled down manner despite strong protests by Pyongyang in the lead up to the joint drill.

The size of the participating troops will be further reduced compared to their springtime drill in March, taking into consideration the Covid-19 situation, and only essential personnel from both countries will take part in the exercise.

Only those who have received coronavirus vaccines can enter the bunker, and all participating personnel are required to take a polymerase chain reaction (PCR) test prior to the training, according to military officials. The South Korean and U.S. troops are also expected to be spread out throughout the training period.

The JCS said it decided to conduct the exercise taking into consideration the coronavirus situation, the maintenance of the combined defense posture and the diplomatic efforts for denuclearization and the establishment of peace on the Korean Peninsula.

The two sides will conduct their defense and counterattack scenarios according to plan.

Seoul and Washington however decided to postpone the verification of full operational capability (FOC), the second in a three-step evaluation process needed for the transfer of wartime operation control (Opcon) from the United States to South Korea. The Moon Jae-in administration initially hoped Korea would regain Opcon from the United States by the end of the president's five-year term in May 2022, but the evaluation process has faced delays due to the Covid-19 pandemic.

Korean Gen. Kim Seung-kyum, deputy commander of the Combined Forces Command, is expected to supervise parts of the exercise, as he did for the springtime exercises. 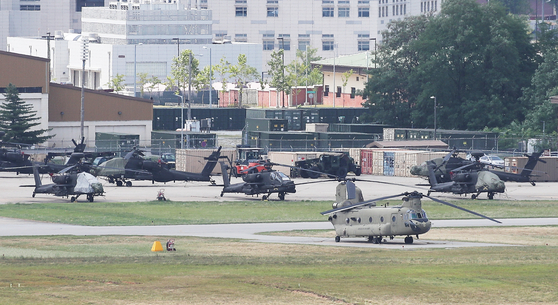 Military helicopters are on standby at Camp Humphreys in Pyeongtaek, Gyeonggi, Monday, as Seoul and Washington kicked off their scaled-down nine-day summertime military exercise. [YONHAP]

Military observers have been monitoring North Korea for signs of any provocations during the joint exercise, traditionally a period of exacerbated tensions on the peninsula. Such military provocations could include the launch of short-range ballistic missiles, which are in violation of UN Security Council resolutions but have been generally overlooked by the United States.

However, there is also the possibility of Pyongyang testing intercontinental ballistic missiles (ICBMs) or submarine-launched ballistic missiles (SLBMs), which Washington has responded sensitively to, though analysts point out that the North will likely be reluctant to take actions that might cross the line in order to leave open the possibility of reviving dialogue with the United States.

North Korea has been unresponsive to military and joint liaison office hotlines since Aug. 10 afternoon, after South Korea and the United States began their four-day crisis management staff training (CMST) as a prelude to their joint exercise this week.

The inter-Korean communication lines, severed unilaterally by Pyongyang in June 2020, were revived on July 27.

A South Korean military official said as of Monday, "We have not detected any unusual movement from North Korea.”

Time for a joint strategic research with the U.S.