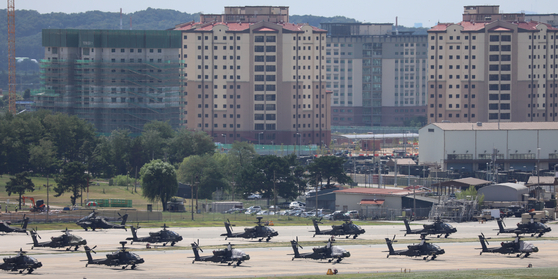 Military helicopters are on standby at Camp Humphreys in Pyeongtaek, Gyeonggi, Monday, ahead of the four-day crisis management staff training between Seoul and Washington set to kick off Tuesday. The preliminary training comes as a prelude to their main joint military exercise expected to take place next week as scheduled, albeit in a scaled-down manner. [NEWS1]

This training serves as a prelude to the main combined command post training (CCPT) exercise scheduled for Aug. 16 to 26. The defensive computer-simulated CCPT exercise is expected to be scaled down and conducted with fewer personnel than the annual springtime joint drill held in March, taking into consideration the coronavirus situation, according to military sources.

The preliminary training this week will be led by the Joint Chiefs of Staff and will focus on how to respond to and manage a crisis situation to prevent an escalation into war. The CMST this time will likewise involve fewer personnel than their springtime training.

The CCPT will be led by the Combined Forces Command and is expected to include a defense scenario and a counterattack scenario as planned.

Gen. Paul LaCamera, commander of the U.S. Forces Korea (USFK) and the Combined Forces Command, will supervise the exercise, as he has wartime operation control (Opcon). However, Gen. Kim Seung-kyum, deputy commander of the Combined Forces Command, is expected to supervise one day each in the first and second parts of the exercise, according to sources.

This will help rehearse for full operational capability (FOC), a step which evaluates command ability needed for the transfer of wartime Opcon from the United States to South Korea.

However, the FOC verification process is again not expected to take place this time around, which further clouds the timeline for the transfer of wartime Opcon. The FOC verification is second in a three-step evaluation process for Korea to regain wartime Opcon, which has faced delays since last year because of the Covid-19 pandemic. The Moon Jae-in administration initially hoped for Korea to regain Opcon from the United States by the end of the president's five-year term in May 2022.

Seoul and Washington are expected to formally announced the schedule and scale of their joint drill before the start of the main exercise next Monday, and notify Pyongyang through its United Nations Command hotline, as according to practice.

This comes despite some calls to delay the joint drill, protested by North Korea, from some officials and lawmakers. The issue has even divided the ruling Democratic Party (DP), with party leadership saying holding the joint exercise is “inevitable,” while a group of 74 liberal lawmakers issued a joint statement last week calling for the postponement of the drill to help improve inter-Korean ties.

Kim Yo-jong, the North Korean leader's younger sister, in a statement on Aug. 1 called for a halt to the Seoul-Washington drill, warning they could undermine inter-Korean relations slightly thawed by the recent restoration of cross-border communication lines.

Chinese Foreign Minister Wang Yi also openly opposed the Seoul-Washington exercise at the Asean Regional Forum (ARF) Friday, saying that the United States "should not take any actions that will intensify tensions” if it wants to resume dialogue with the North.

A South Korean Foreign Ministry official told reporters Monday that it was “unusual” for the Chinese top envoy to refer to the Seoul-Washington military exercise at the ARF.

The official added, “I believe the international community generally understands that the nature of the South Korea-U.S. joint exercise is annual and defensive, and does not threaten any specific country, including North Korea.”

Rep. Kim Gi-hyeon, the PPP floor leader, said in the party’s supreme council meeting Monday the Moon government is “begging for Kim Jong-un’s permission to conduct an exercise in name only,” referring to the scaled-back joint drill.

The Blue House has remained mum on the issue as of Monday.

According to a Realmeter poll released Monday, 50.4 percent of respondents said they do not agree with calls for delaying the Seoul-Washington military drill, while 45.3 percent said they agree. The poll, commissioned by YTN, was conducted on 500 people aged 18 and older nationwide last Friday.

There was some division between party lines over the joint drill issue, with just 28.8 percent of supporters of the conservative main opposition People Power Party (PPP) who were in favor of delaying the joint exercise, compared to 69.4 percent who were opposed.

In contrast, 64.4 percent of supporters of the ruling Democratic Party were in favor of a delay, compared to 30.1 percent who were not.

By generation, 62 percent of people in their 20s were more opposed to a delay, higher than other age brackets, while 33.9 percent were in favor.