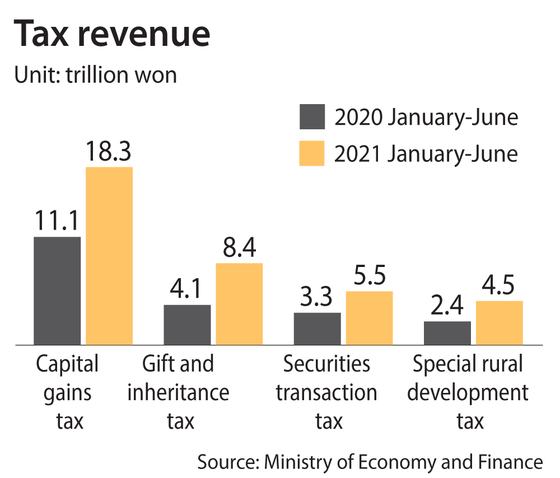 Government coffers are overflowing as the property and stock markets boom.

Capital gains tax revenue totaled 18.3 trillion won in the first half, up 64.9 percent on year and half the total asset market-related taxes collected.

It wasn’t so much that apartment trading volume was up, as it rose only 5 percent between Nov. 1 last year and May 31, as much as it was a result of higher prices.

Homeowners gifting their properties to children is another factor that contributed to the rise. The Moon Jae-in administration raised capital gains and comprehensive real estate taxes levied on homeowners thinking it would push apartment owners sell their properties, but Koreans scrambled to gift the apartments to family members even if they had to pay gift taxes.

Tax revenue is expected to surge with the comprehensive real estate tax, which must be paid by the end of year.

A total of 4.5 trillion won in revenue from the special rural development tax, a surtax on property transactions, was collected, up 87.5 percent on year.

Many say that high taxation rates haven’t been effective in achieving government's policies. The Moon administration vowed to tame apartment prices and increased higher taxes on apartment owners to prompt them to sell their properties, but prices have been as high as ever.

“High income earners and big companies pay some 70 to 80 percent of the total tax revenue, and raising taxes for a specific class or demographic can’t be continued for a long time,” said Park Hyun-soo, head of K-Policy Platform, and former commissioner of Statistics Korea and president of the Korea Institute of Public Finance. “Having everyone pay at least a small amount of tax if they earn some income is the current trend for tax policies around the world. If the government uses tax rates as a method to control the market, its policies will inevitably become inefficient.”