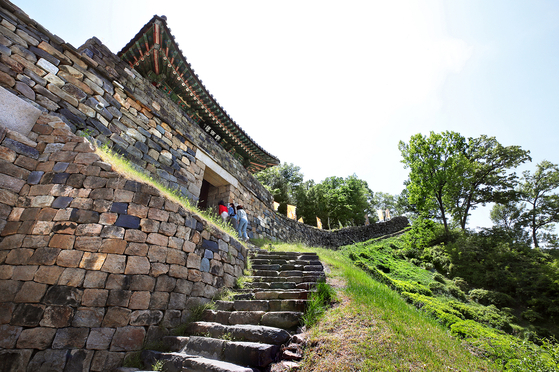 Gongsanseong fortress in Gongju, South Chungcheong, is one of eight historic sites included in the "Baekje Historic Areas," which was inscribed on Unesco in 2015. [PARK JONG-KEUN]


Baekje (18 B.C. to A.D. 660) is one of the lesser-known eras from Korea's Three Kingdoms Period (57 B.C. to A.D. 668). Compared to Goguryeo that secured a vast territory and Silla, which left behind a large volume of documents as a result of efforts during the time to unify the three kingdoms, Baekje has received relatively less exposure, not only in school textbooks but also at museums.

Scholars of this somewhat forgotten era have been insisting that the country should make more efforts to promote the rich culture of Baekje, especially with the Unesco inscription of “Baekje Historic Areas” in 2015. Eight archaeological sites collectively make up the “Baekje Historic Areas.” These sites are spread across three cities — Gongju, Buyeo and Iksan — in South Chungcheong and North Jeolla.

According to Unesco, the sites were collectively designated “as they together represent the later period of Baekje, during which time they were at the crossroads of considerable technological, religious, cultural and artistic exchanges between the ancient Asian kingdoms in Korea, China and Japan.” It also added that the sites contribute to “forming exceptional testimony to the unique culture, religion and artistry of the kingdom of Baekje.”

The three cities have been jointly holding a festival at a local level since the Unesco inscription, but to attract global attention to this era, “Baekje Historic Areas” has been newly added to the second edition of the World Heritage Festival. 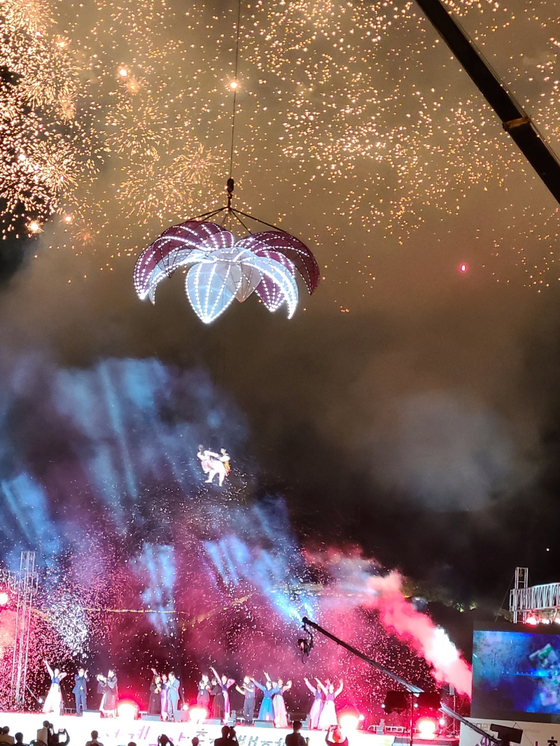 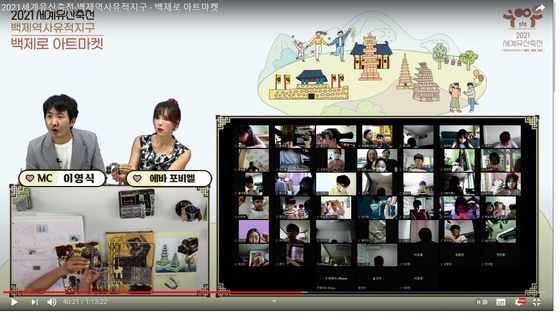 An online program "Baekjero Art Market" gets held every Saturday at 4 p.m. Children, who have received the craft kit in advance can make various Baekje relics together online. [SCREEN CAPTURE]


“By focusing on the historical facts in the three cities, we’ve organized various online and offline programs for not only Koreans but also the world to participate in and enjoy,” said Byun Jeong-min, director of the festival. “A total of 65 local and overseas organizations are taking part to make this a global festival. We hope the global audience can revisit the rich culture of Baekje through the festival.”

A total of 22 online and offline programs have been organized for the World Heritage Festival for "Baekje Historic Areas," which kicked off on Aug. 13 and runs through Aug. 31. The opening ceremony was held in the three cities on Aug. 13 and was also streamed online.

“Korean cultural content like K-pop, Korean food, television dramas, webtoons among many others are disseminating across the globe in the name of hallyu, or Korean Wave. In that sense, I think it’s important to shed light on the history of Baekje and its culture, which flourished through active exchanges with neighboring countries, which we see as the advent of hallyu,” said Byun. “Like Baekje, we hope to play a significant role in influencing the world with Korean culture.”

Jang Nam-mi, a Gongju citizen who visited the festival on the opening day said she's so proud to be living in a city that possesses such important historic sites.

"I'm more than happy that we can promote the sites globally through such a festival," said Jang. "It's a shame that this could not become a real festivity amid the pandemic, but I hope a lot of people outside the country participate in online programs and learn about Baekje."

Historic sites of the Ungjin period 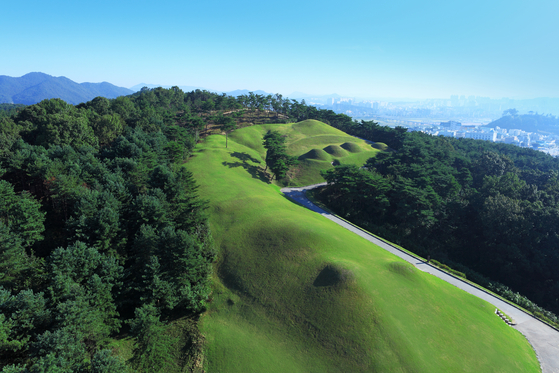 Royal tombs at Songsan-ri which includes the tomb of King Muryeong (r. 501-523) is also part of the “Baekje Historic Areas.” [CULTURAL HERITAGE ADMINISTRATION]


During the Three Kingdoms Period, the three rival kingdoms dominated the Korean Peninsula and constantly vied with each other for supremacy through both political and military means. Alliances frequently changed between these states and China on the west side and Japan to its southeast.

In 475, when Goguryeo attacked Baekje, Baekje’s then-capital Hanseong was ravaged by war. Baekje relocated its capital to Ungjin, which is today’s Gongju, due to its geographical advantages. As it was a priority for the kingdom to prepare for possible future invasions from Goguryeo, Gongju’s diamond-shaped basin located on the midstream of the Geum River, surrounded by mountains, was a perfect spot. Ungjin was Baekje’s capital from 475 to 538. 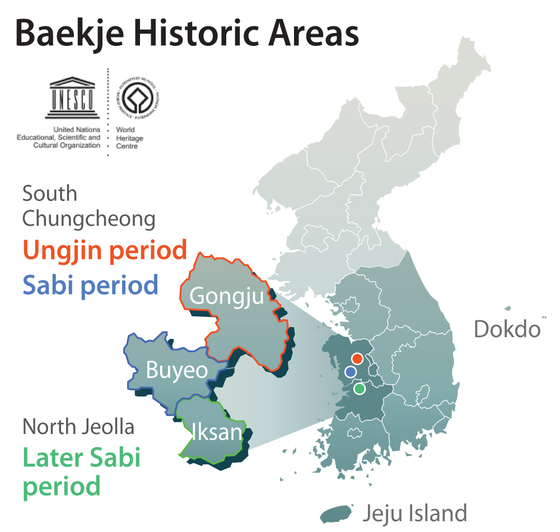 It is presumed that the fortress was established during King Dongseong’s reign, which was between 479 to 501. The fortress walls, stretching 2,660 meters (8,727 feet) consist of both earthen wall (735 meters) and stone wall (1,925 meters) sections. Archaeologists suggest it was mainly earthen walls during Baekje, but reconstructed using stone in the later periods.

The royal tomb site in Songsan-ri, which includes the tomb of King Muryeong (r. 501-523), is also one of the “Baekje Historic Areas.”

According to researchers, most Baekje tombs when discovered have been robbed as they were easy to access. Therefore, it is difficult to identify who the tomb's were built for as they are devoid of any relics. But King Muryeong’s tomb was discovered intact in 1971, becoming one of the major archaeological discoveries in Korea and a crucial source for understanding Baekje.

“It was a moment of excitement for all archaeologists in Korea when the entrance door of King Muryeong’s tomb opened for the first time in 1971, after some 1,500 years,” said Korean historian Kang Hye-young. “I heard that a white fog came from the tomb for a long time after the entrance was opened.” Nearly three thousand objects were excavated from the tomb.

People can take part in a mobile role-playing game titled, “RPG Mission in the Royal Tombs,” which is organized seven times a day during the festival. Using a smartphone, participants can experience King Muryeong’s tomb in a virtual reality game. The player has to work with the five characters in the game, who led the cultural development of Baekje and get hints from them to finally get their hands on the golden key. Twelve people can participate per session. 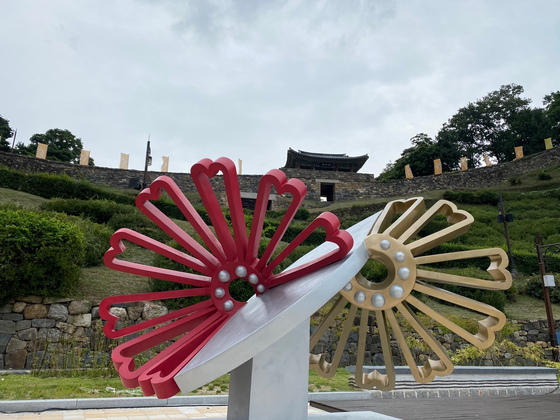 An artwork displayed in Gongsanseong fortress in Gongju. [JANG NAM-MI]


Gongsanseong fortress is already a popular destination for Gongju citizens but visitors during the festival will be able to view artworks that have been installed for the event. Ten artists and art groups have been selected to showcase their works inspired by Baekje, which are displayed in different sites in the three cities. Two works are installed in Gongju — one at the Gongsanseong Visitor Center and one more at the bus stop at its entrance.

A 40-minute night tour of Gongsanseong has also been organized during the festival. The program operates from 8 p.m. to 10 p.m. every day during the festival period, making stops at different pavilions inside the fortress. Only 40 people can participate in the program per day, so reservations are a must. 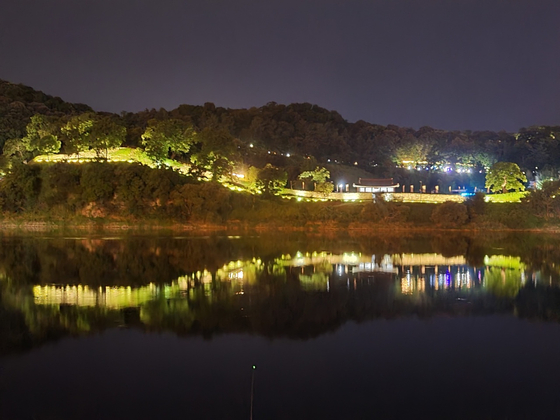 
Traditional performances will be staged every Saturday on Mireu Island inside Geumgangsingwan Park near the fortress. “Piri Jeongak and Daechwita,” which is a performance of solo Korean flute known as piri and Korea’s royal military marching music called daechwita, was performed on Aug. 14. On Aug. 21, Gongju Arirang Research Institute, together with Gongju citizens and traditional arts troupe Hon will put on a performance. On Aug. 28, gugak (traditional Korean music) ensemble Yeonjeong will perform. The performance begins at 8 p.m. and will also be streamed live.

Historic sites of the Sabi period 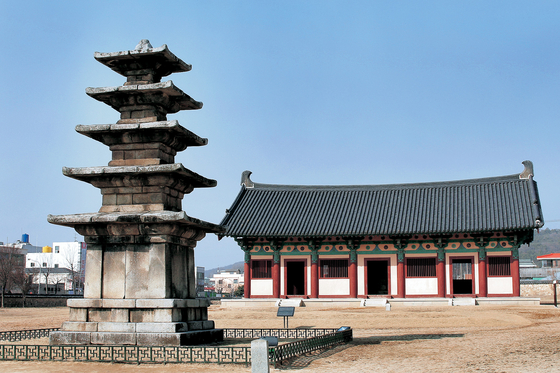 
Baekje had to relocate its capital again in the year 538 to Sabi, or current-day Buyeo, as Ungjin was too isolated for the further advancement of Baekje. With a series of victories against Guguryeo, having a capital in such a closed-off and secluded area was no longer necessary. King Seong (r. 523-554), was responsible for relocating the capital to Sabi, as well as the successful state management following his predecessor King Muryeong.

A royal district, which included the Gwanbuk-ri administrative buildings, Busosanseong fortress, a Buddhist temple called Jeongnimsa and the royal tombs in Neungsan-ri, was constructed in the center north of the capital close to the Geum River, and the Naseong city wall surrounded the entire city. 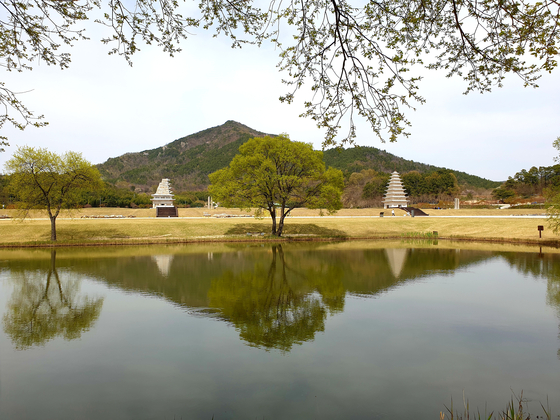 
When King Mu (r. 600-641) became Baekje’s new ruler, he established Iksan, his hometown, as the new mecca of the era. He regained the power of Baekje by fiercely attacking Silla, which resulted in victories. Historians believe that he was revered as a ruler as he established Mireuksa Temple. Constructing such a large Buddhist temple requires not only the king’s authority but also wealth. The geographical advantages of Iksan — acting as a traffic hub — made it an attractive location to develop as well.

“Being able to establish Mireuksa Temple testifies to King Mu’s power,” said Kang. “With the establishment of such an extravagant Buddhist Temple, Baekje regained its footing as a strong kingdom.”

Together with the temple, a royal site was built in Wanggung-ri as Iksan became the powerhouse of the capital. The site is composed of facilities related to the royal palace of Baekje and workshop facilities that produced gold and glass objects. There are a total of 36 sites, east-west stonework and rectangular palace walls built with stone, which make up the facilities that are connected to the royal palace. In particular, a large site, which is believed to have held the king’s official palace, was found. This revealed the layout and spatial planning principles for the royal palaces of Baekje.

“The physical evidence of King Mu’s management of Iksan are the Wanggung-ri historic sites and the Mireuksa Temple site,” Kang added. “Such geographical, historical, and cultural factors demonstrate that the Iksan area was sufficient enough to function as a passageway to the capital and act as a complement to Sabi period’s capital city.” 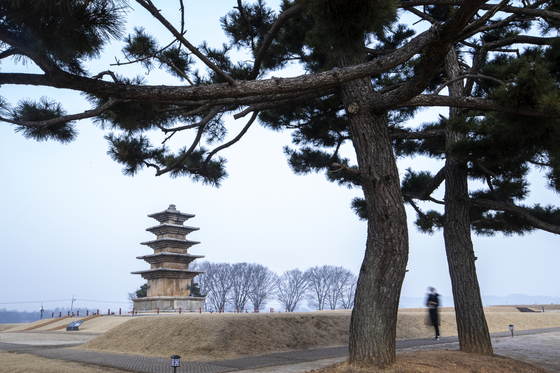 
There’s also an RPG program in Iksan, allowing festival participants to have a VR experience of the Mireuksa Temple as well as the royal palace at Wanggung-ri. A night tour program of the site and the temple was held only once on Aug. 13, however, visitors can take a stroll around the site until it closes at 10 p.m. to see the lighting installations. Every Sunday at 8 p.m., a special performance is held at the Mireuksa Temple site. Though it’s free, to limit audience members to 400, reservations are must.

The Baekje era came to an end in 660 when it was conquered by Silla and China’s Tang Dynasty during King Uija’s reign. It is said that the king’s incompetence contributed greatly to Baekje’s downfall. King Uija and his crown prince took refuge in the former capital Ungjin, however, the aristocrats there turned them over to the Silla-Tang allied forces.

“Though the era came to a devastating end, we can learn a lot from the history of Baekje,” said Kang.

For more information about the festival visit baekjeworldheritage.kr