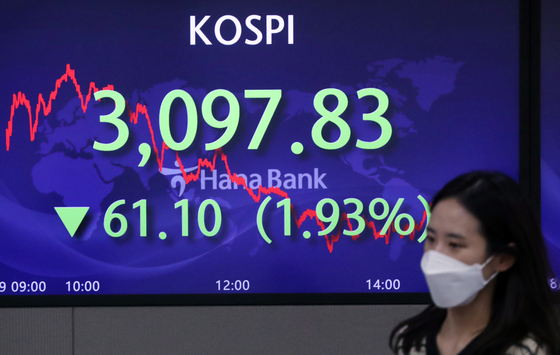 A screen in Hana Bank's trading room in central Seoul shows the Kospi closing at 3,097.83 points on Thursday, down 61.10 points, or 1.93 percent, from the previous trading day. [NEWS1]


Stocks tumbled nearly 2 percent Thursday on concerns over the U.S. Federal Reserve minutes that hinted at the possibility of earlier-than-expected tapering. The won steeply fell against the dollar.

The benchmark Kospi slumped 61.1 points, or 1.93 percent, to close at 3,097.83 points. The figure marks the index's biggest daily loss since Feb. 26, and the closing price marks the lowest since early April.

Trading volume was moderate at about 637 million shares worth some 16.7 trillion won ($14.2 billion), with losers outnumbering gainers 850 to 58.

Stocks got off to a lackluster start, tracking the overnight Wall Street stock plunge.

The Dow Jones Industrial Average lost 1.08 percent as the Federal Reserve minutes signaled that the U.S. central bank could start rolling back its accommodative policies as early as later this year. The tech-heavy Nasdaq Composite and the S&P 500 slumped 0.89 percent and 1.07 percent, respectively.

The market decline deepened in the afternoon as the local currency's slide may trigger further sell-offs by foreign investors.

"Concerns about the pace in the Fed's tapering seem to have pulled down the stock prices," Daeshin Securities analyst Lee Kyung-min said.

"Such worries weighed on the chipmakers that have already been under pressure, in addition to auto, steel and other sectors," he added.

The local currency closed at 1,176.2 won to the dollar, up 8.2 won from the previous session's close.