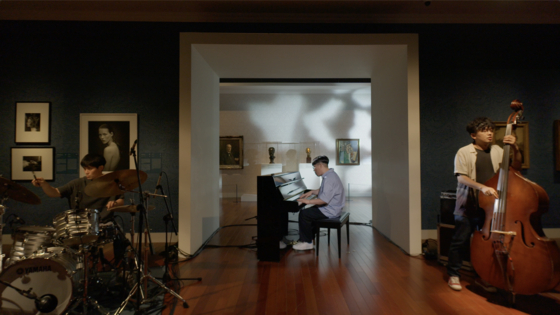 Yun Seok Cheol Trio performs inside the National Museum of Korea's exhibition hall, which displays the "'Icons and Identities' from the National Portrait Gallery, London" exhibit that recently came to an end on Aug. 15. [SOMETIMES LUCKY]


Museum grounds are usually kept so quiet that a needle could be heard falling on the floor, acting as an almost solemn place where visitors can quietly contemplate on the displayed paintings or artifacts.

But recently, cheerful jazz tunes broke the silence within the walls of the National Museum of Korea’s exhibition hall displaying “'Icons and Identities’ from the National Portrait Gallery, London,” a special exhibition which recently came to an end on Aug. 15. The music was even being performed live by the Yun Seok Cheol Trio, who brought large instruments — a piano, double bass and a drum set — into the room that’s usually kept strictly supervised.

What's the piano doing in the museum?

The jazz trio wasn’t illegally busking inside the museum, but rather performing for the newly launched “Piano in the Museum” project.

The project has been organized by the Cultural Foundation of National Museum of Korea to create online content to promote the important relics or special exhibitions at the state-run museums across the country amid the coronavirus pandemic. National museums have been providing virtual tours and other online videos where curators walk the viewers through the exhibited works or artifacts. However, for the latest project, the foundation says it wanted to create unique online content that will appeal to a wider audience, who may not have normally paid much attention to what goes on at the national museums.

“We wanted to garner attention naturally by staging a concert-like performance inside the museums and providing a rare opportunity to watch an online performance along with an exhibit,” said Oh Seung-min, an official at the foundation.

The foundation decided to collaborate with artists from Antenna Music, a label that represents musicians from various genres, including a large number of singer-songwriters who can play the piano.

The Yun Seok Cheol Trio kicked off the project at the National Museum of Korea in Yongsan District, central Seoul, and the video they produced was uploaded on July 7. Next up was singer and songwriter Lee Jin-ah, who performed at the Chuncheon National Museum in Chuncheon, Gangwon, inside the hall exhibiting “Five Hundred Arhats of Changnyeongsa Temple Site: Reflection of our Hearts.” Lee performed together with drummer Seo Joo-young and bassist Park Jong-woo, and their video was uploaded on Aug. 13. Both videos are receiving rave reviews from the public, with comments like, “It’s probably the best project I’ve ever seen by a state-run museum.” 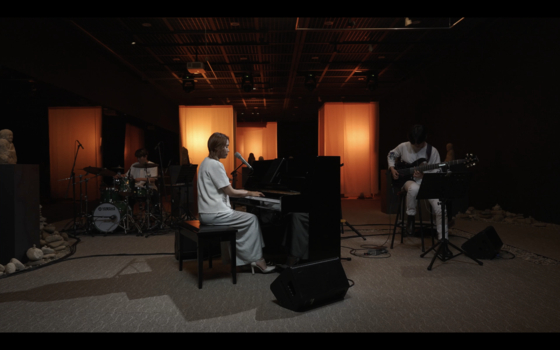 Singer and songwriter Lee Jin-ah, center, performs on the piano along with drummer Seo Joo-young and guitarist Park Jong-woo inside the room exhibiting "Five Hundred Arhats of Changnyeongsa Temple Site: Reflection of our Hearts" at the Chuncheon National Museum in Gangwon. [SOMETIMES LUCKY] 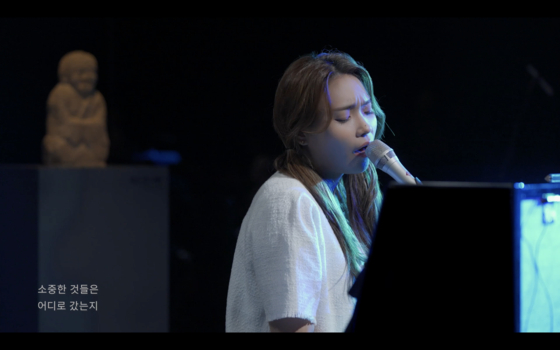 Lee Jin-ah performs on the piano, surrounded by statuettes known as Arhats, or louhan, in Buddism, which refers to those who gained enlightenment. [SOMETIMES LUCKY]


Jazz pianist Yun Seok-cheol of the trio told the Korea JoongAng Daily that he was “honored to be selected as one of the artists to be able to perform at the National Museum of Korea,” where he’d visited as a little boy on school trips. “I still visit the museum from time to time whenever I want to be inspired.”

“As soon as we heard about the project, we were very amazed and wanted to be a part of such an interesting project,” said Yun.

“It was my first experience performing inside an exhibition room, surrounded by great artwork. I was excited but scared at the same time [because it’s a sensitive location]. I also felt like I was traveling in time. If I had performed in a different exhibition hall that displays other artifacts, I think it would have been a completely different performance. We were inspired by the works, and that directly affected our improvised performance.”

As the trio’s setup at the museum was around the portraits from England, Yun said he selected British songs he likes to reinterpret them as a jazz piece. 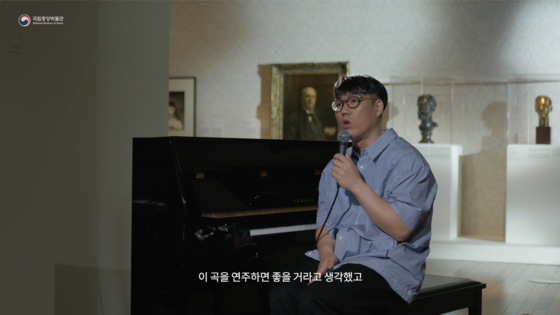 
“The only problem was that I had too many songs I wanted to cover, so it was difficult for me to select only a few for this project,” said Yun. The songs Yun ended up picking for the video include The Beatles’ “Mother Nature’s Son” and Blur’s “Coffee & TV.”

“We also watched the exhibit prior to the performance, and I could feel that the portraits really reflect the time, as if a film of that era was unfolding before me,” said Yun. “That is why I included the trio’s ‘2019 Seoul’ in the performance, as I feel like the song is a portrait of Korea in 2019.”

Museums are naturally tightly secured venues, as they have to safeguard the important pieces of art and priceless relics it houses. However, recently, as offering diverse online content for the public became more important than ever, museums have been more open to “experiments,” allowing things to happen inside the venue that were usually prohibited, like a Yamaha piano entering one of its exhibition halls to be played. In March, the National Museum of Korea even gave a green light to Seoul Fashion Week to hold a show there, allowing models to do catwalks inside the exhibition halls and around the relics.

Hong Young-pyo of Sometimes Lucky, who produced the videos, said he understands how sensitive it is to do such a project inside museums, and making sure nothing gets damaged, but had no doubt the outcome would be “a great piece of video content for both the artists and museums.” 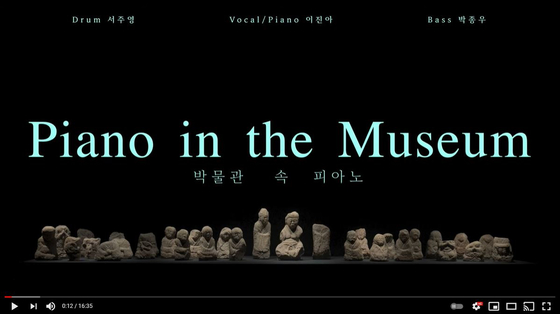 A scene from the video content of Lee's performance at the National Chuncheon Museum, featuring the Arhats. [SCREEN CAPTURE]


“The name ‘Piano in the Museum’ itself was so appealing,” said Hong. “Having artists who are already so acknowledged with their piano performances stage such a concert surrounded by priceless artifacts was indeed an unforgettable experience. We hope the videos touch the hearts of all those who watch them, as much as it did for all of us at the scene.”

Yun says performing inside a museum was such an inspiring experience that he one day hopes to perform a “mix of jazz and electronic music” next to one of the late artist Nam June Paik’s works.

“It was indeed a valuable experience that allowed me to realize the great power of culture,” Yun said.

“Because of the pandemic, so many live performances are being canceled, and many are being taken online,” said Hong. “It’s depressing that it’s becoming more and more difficult to enjoy live music, but at the same time, creative online projects like ‘Piano in the Museum’ are being tried, tested and created. Although it cannot completely replace live shows, I think such diverse attempts will continue to be offered to the public.”

piano in the museum antenna music national museum of korea

After a decade of research and a century overseas, Oegyujanggak Uigwe is open to public