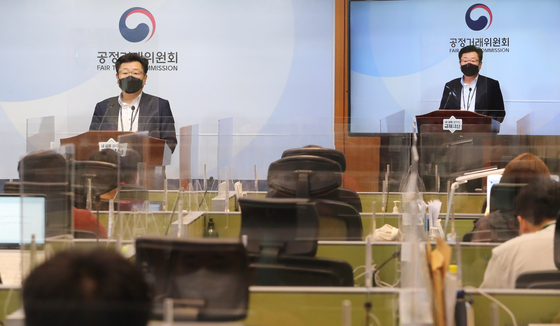 An official from the Fair Trade Commission (FTC) gives a briefing on Tuesday morning at the Sejong Government Complex in Sejong after the FTC approved KT Skylife to acquire Hyundai HCN. [YONHAP]


KT Skylife has received approval from the Fair Trade Commission (FTC) for the acquisition of Hyundai HCN, bringing to a close a transaction that began in October.

The regulator has attached seven conditions to the approval, including a prohibition on raising license fees faster than inflation and a requirement to maintain the current number of TV channels.

The FTC started reviewing the files on the merger of the two satellite broadcasting businesses on Aug. 18 and authorized the deal on Tuesday.

It said that it approved the deal to allow the two companies to promptly react to the fast-changing broadcasting market, but added the seven conditions to make sure that the merger does not lead to any form of monopoly afterward.

The businesses overlap in three districts in Seoul, two districts in Busan, one district in Daegu, two regions in North Gyeongsang and one region in North Chungcheong. The FTC’s conditions will prevent them from hindering fair competition in those regions.

Until 2024, the two companies will not be able to increase the license fees customers have to pay above the inflation level. They cannot refuse new subscribers or force them into taking on pricier subscription plans.

The two companies will also be mandated to notify customers of their channels and license fees on their websites after the merger is complete.

KT Skylife announced that it signed a deal to buy Hyundai HCN and Hyundai Media on Oct. 13 last year. It registered the merger on Nov. 6 with the FTC. KT Studio Genie was appointed as the purchaser by KT Skylife, and the company filed the change on Aug. 12.

The acquisition will take place in 10 businesses and will include television broadcasting, home shopping, landline telephony and high-speed internet.

The merger conditions will stand until Dec. 31, 2024, but KT can request a revision a year after the merger is complete.