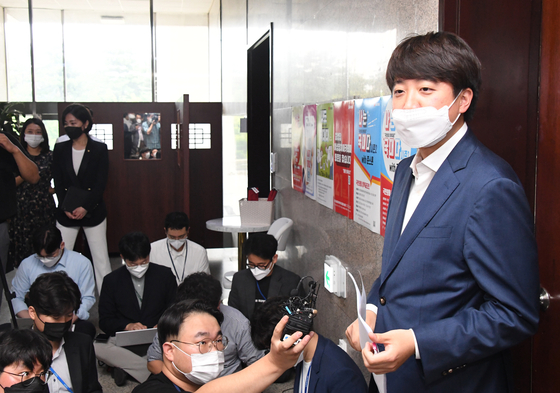 People Power Party Chairman Lee Jun-seok on Tuesday announces the outcome of the Supreme Council's decision to take punitive action against six out of 12 lawmakers suspected of having made illegal property transactions. [NEWS1]


The largest opposition People Power Party (PPP) on Tuesday made public the names of 12 lawmakers accused by the state anti-corruption agency of having made unlawful real estate investments and decided to take punitive action against six.

PPP leadership on Tuesday held an emergency meeting to discuss how it will handle the matter. Throughout the morning, the leadership listened to the 12 lawmakers’ explanations through video conference calls to verify the commission’s discoveries.

Later in the afternoon, PPP Chairman Lee Jun-seok announced that the leadership decided to take punitive actions against six lawmakers and urge them to cooperate with an upcoming investigation. The anti-corruption commission has handed over the findings to the National Police Agency on Monday.

Chairman Lee said the party will ask five lawmakers — Reps. Kang, Lee Joo-hwan, Lee Chul-gyu, Jung and Choi — to voluntarily give up their party memberships and undergo their police investigations as independents.

It also decided to expel Rep. Han, a proportional lawmaker; she will also fight the accusation as an independent lawmaker.

The PPP leadership was unable to make that formal recommendation, because the party has yet to form an ethics committee since it elected its new leadership in June.

Asked about the next course of action, Chairman Lee said he will form an ethics committee if the five lawmakers do not leave the party voluntarily after 10 days.

“In the case of Rep. Han, a motion to expel her will be submitted to the general lawmakers’ assembly,” Lee said.

Han was accused of violating the law governing farming land. She issued a statement on Tuesday that she purchased the concerned properties in 2004 and 2006. She insisted on her innocence, saying the commission should have made a site inspection to make sure that she had violated the law on farming land, but failed to do so.

“I will fully cooperate with the upcoming investigation to clear up the accusation,” she said. “And I will reveal how poorly the commission conducted its probe, with my innocence.”

The PPP decided that it will not take any action against the other six lawmakers because it deemed their explanations of innocence convincing enough or the suspected illegalities were committed by their families, not themselves.

“The Supreme Council made this unanimous decision on how to handle the list after seven hours of discussion,” Chairman Lee said.

Chairman Lee said suspicious investments linked to Reps. An, Yun and Song were not made by themselves and the party concluded that they had not been involved in them at all. Reps. Kim, Park and Bae offered satisfactory explanations to the leadership on the concerned properties, Lee said.

Meanwhile, five of the 12 lawmakers are members of former Prosecutor General Yoon Seok-youl’s presidential campaign. Rep. Han is in charge of the campaign’s industrial policy, while Rep. Song is in charge of real estate policy. Rep. Lee Chul-gyu is the head of organization, and Rep. An is the chief of public relations. Rep. Jung is in charge of communication.

Rep. Yun is a presidential contender herself. The first-term lawmaker became a national political figure with her speech at the National Assembly in July last year that sharply criticized the Moon Jae-in administration’s real estate policy.

The concerned investment traced back to Yun’s father, according to the party.