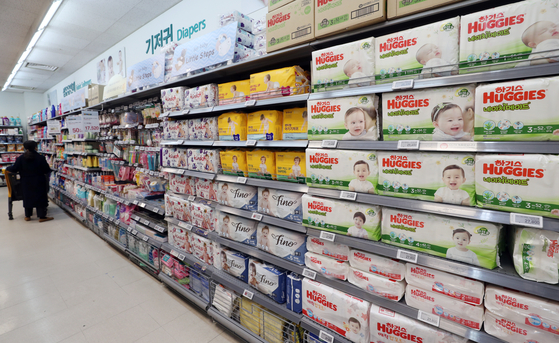 Diapers are displayed at aisles at a discount mart in Seoul. Korea's fertility rate was 0.84 births per women last year, down 0.1 on year and the lowest out of 38 OECD member countries. [NEWS1]


Money alone does not drive up the birthrate, at least according to one academic.

In 2020, 272,300 infants were born in Korea, down 10 percent on year, according to Statistics Korea. The fertility rate was 0.84 births per women, down 0.1 on year and the lowest out of 38 Organization for Economic Cooperation and Development (OECD) member countries.

In a plan announced last December, the government said it will provide higher cash benefits for infants born in 2022 and after. A 300,000-won ($256) payment will be disbursed every month for infants less than 24 months old. The current package provides 200,000 won per month for infants aged 11 months and below and 150,000 won for those aged between 12 and 23 months. An additional 2-million-won cash bonus will be given to parents when their baby is born starting next year.

Professor Kim Hyun-sook, an economics professor at Soongsil University and former presidential secretary for employment and welfare, believes that different policies are needed.

In a paper titled “The Impact of Pro-natal Policies of Central and Local Governments in South Korea,” published in the Journal of Women and Economics in July, Kim argues that giving cash benefits was effective in increasing the fertility rate of married women up to 2015, but became ineffective starting 2016.

“Government spending for child care, family and women's matters were the only policies that had a positive effect on the fertility rate of married women since 2016,” read the paper. “The key idea is that direct cash bonuses related to births aren’t effective anymore because the decision whether to have children is becoming more complicated to simply be influenced by cash-based support.”

“Housing problems, employment situations and gender conflicts have been rapidly rising during the present government, and this means that people won’t decide to have children for an additional 100,000 to 200,000-won payment,” said Kim in an interview. “Through research, we need to make new policies by considering many different situations, creating a social system in which people can raise children even if they are financially struggling.”