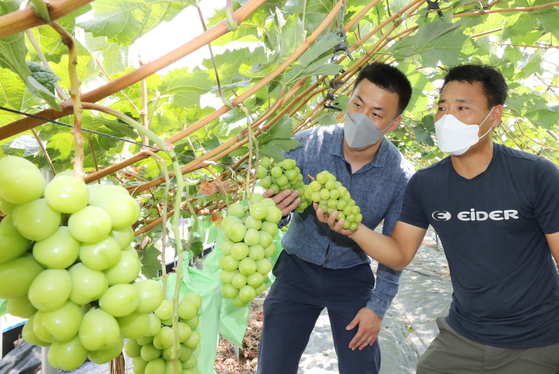 In Korea, apples and tangerines were traditional favorites. But grapes have slowly been taking the crown largely driven by the growing popularity of shine muscat grapes.

Shine muscat grapes, which were first developed in Japan, started gaining public attention around 2018 in Korea for their crunchy texture, sweetness and aroma. The seedless grapes have high sugar content, averaging a Brix value of between 18 and 19 degrees compared to 14 from Kyoho grapes.

Grapes were the most popular fruit in terms of sales at Emart last year, followed by apples, strawberries and tangerines. In 2019, apples were No.1 and grapes were in third place. Until 2017, grapes were not even in the top 5. 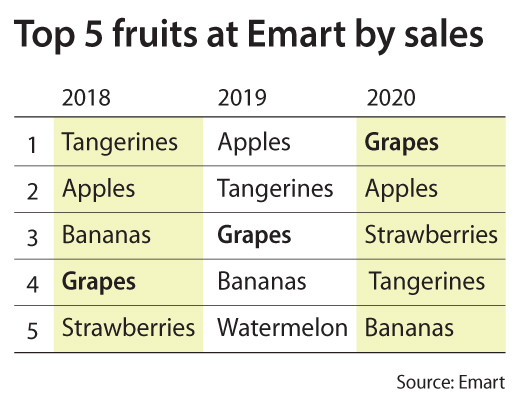 Consumers these days prefer fruit they can eat without peeling, which is also a contributing factor driving the popularity of shine muscat grapes, retailers say.

At Emart, the sale of fruit that have peels has declined. Sales of pineapples decreased 40.2 percent as of July compared to the beginning of the year while sales of grapefruits fell 25.2 percent and tangerines 6.4 percent.

Young shoppers are especially enthusiastic about luxury fruits. They buy them and take photos of them and share the photos on their social media.

“In the past, apples and pears were the two most popular fruits for Chuseok gifts, but these days people prefer seedless and sweeter fruit,” said Jeon Jin-bok, a grape buyer at Emart.