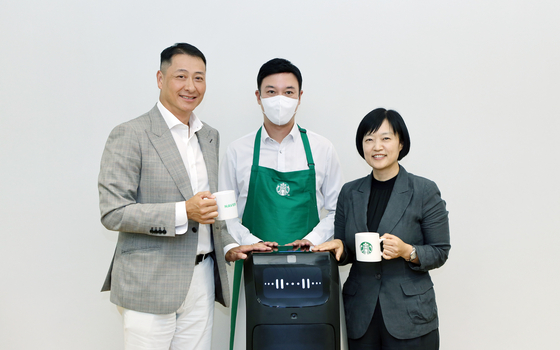 
Starbucks Korea and Naver announced Thursday they signed a memorandum of understanding (MOU) to work together online and off, even venturing into the metaverse.

The MOU was signed Wednesday at Naver’s Green Factory in Seongnam, Gyeonggi.

The companies announced that a virtual Starbucks experience will be provided on Naver's Zepeto metaverse platform, although specific plans weren't detailed.

Additional benefits will be provided for people who use both the coffee franchise’s Starbucks Reward loyalty program and the Naver Plus Membership, a paid subscription program that offers bigger discounts and reward points.

Starbucks merchandise will be sold on Naver.

“We will try our best to strengthen the distinct Starbucks experience both online and offline by applying innovative future technologies in various fields and providing many benefits to our customers,” said Song Ho-seob, CEO of Starbucks Korea.

The MOU follows Naver’s share swap deal in March with Emart — 67.5 percent owner of Starbucks Korea — and Shinsegae International. The companies promised to form a strategic partnership and strengthen cooperation with the deal.