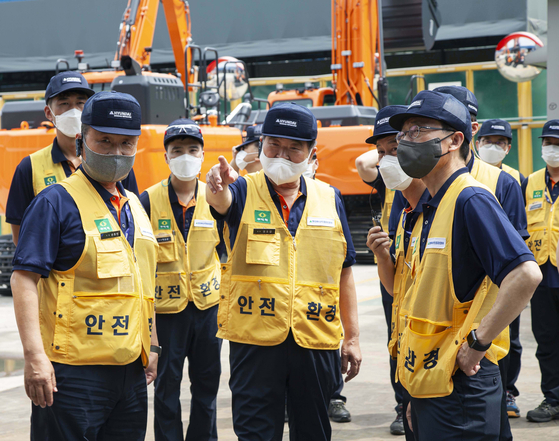 
Doosan Infracore’s plan to issue 800 billion won ($684 million) in new shares is being met with a wide range of opinions from analysts.

Everyone agrees that the move will dilute existing shareholders, but some say that the additional money will help the company’s balance sheet and its business.

The money will be used to buy a 20 percent stake in its Chinese unit, pay taxes and invest in research and development.

Doosan Infracore, 30 percent owned by Hyundai Genuine, also plans to split its shares 5 to 1 before the capital increase, which is scheduled for later this year.

Hyundai Genuine was established in February to acquire the 30 percent stake in Doosan Infracore from Doosan Heavy Industries & Construction.

“The split won’t affect the value of shares held by existing shareholders,” said Han Young-soo, an analyst at Samsung Securities. “But issuing new shares will result in a bigger dilution than what was expected.”

Doosan Infracore will spend 300 billion won to buy the 20-percent stake in Doosan Infracore China (DICC) from a group of investors that filed a lawsuit against the company for not keeping a promise to file for an initial public offering.

Han added that 200 billion won in corporate taxes to be paid by Hyundai Genuine and Doosan Heavy may be another reason for the big share sale.

The corporate tax liability was created in the process of restructuring Hyundai Infracore ahead of the sale of the 30 percent stake to Hyundai Genuine.

He estimates that the 800-billion-won increase will cause around a 38-percent dilution, adding it could cause “a temporary shock” to the stock’s value.

But in the mid to long term, the capital increase could improve Doosan Infracore’s financial structure by reducing its debt and by providing funds to improve its business, Lee added.

From the capital increase, Doosan Infracore’s debt ratio is projected to be reduced around 80 percentage points to 250 percent.

Doosan Infracore will be renamed Hyundai Doosan Infracore next month following a vote at an extraordinary shareholder meeting scheduled to take place at its headquarters in Incheon on Sept. 10.

Hyundai Doosan Infracore’s goal is to become the No. 5 construction equipment manufacturer globally by 2025 with 10 trillion won in sales.

As of 2019, Hyundai Construction Equipment had 1.5 percent of the market and Doosan Infracore 2.1 percent, according to market research company Yellow Table.