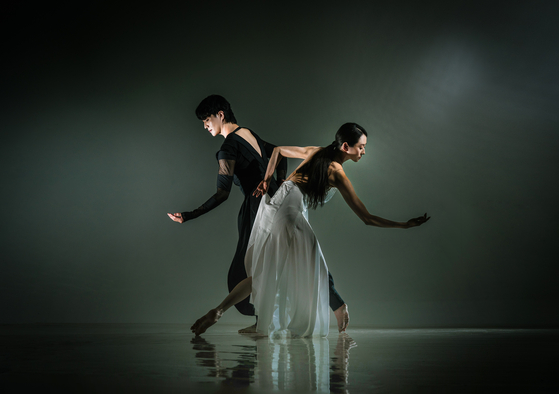 A duet in ″Daseot Oh,″ or ″Five Elements,″ a new work by the National Dance Company of Korea, which will premiere on Sept. 2 at the National Theater of Korea. [YANG DONG-MIN]


In the eyes of a veteran of Korean dance, the Covid-19 pandemic is the result of “an error in the cycle of nature.”

“The earth has been suffering with unprecedented heatwaves, fine dust and heavy snow. There were signs of abnormal climate changes across the world,” said Sohn In-young, artistic director of the National Dance Company of Korea.

As a state-run troupe of traditional Korean dance, Sohn says she wanted to address the pandemic through dance and raise awareness of the environmental problems the world faces today. She selected “Daseot Oh” or “Five Elements” as her first choreographed work since taking office last November.

“Daseot Oh” kicks off at the National Theater of Korea’s Daloreum Theater in central Seoul from Sept. 2 and runs for four days. The performance was supposed to premiere last year but got pushed back because of Covid-19. Sohn says the extra time helped her to polish up the work.

To express such an issue through traditional Korean dance, Sohn said in a recent interview with the Korea JoongAng Daily that she naturally was reminded of Korea’s cheoyongmu dance, which was traditionally used to dispel evil spirits and pray for tranquility at royal banquets or during exorcism rites on New Year’s Eve. The dance was inscribed on Unesco’s Intangible Cultural Heritage list in 2009. 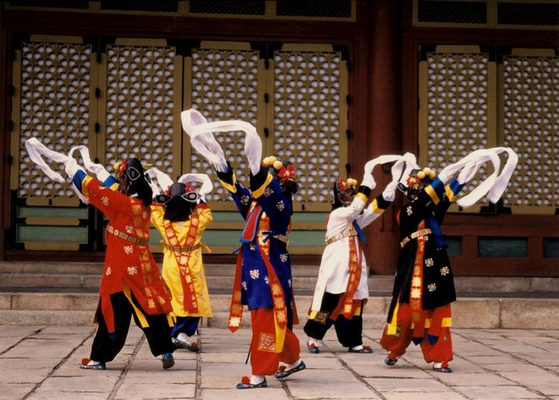 Korean traditional dance known as cheoyongmu was traditionally used to dispel evil spirits and pray for tranquility at royal banquets or during exorcism rites on New Year’s Eve to promote good fortune. The dance was inscribed on Unesco’s Intangible Cultural Heritage list in 2009. [CULTURAL HERITAGE ADMINISTRATION]


The dance is based on the Korean legend of Cheoyong, the son of the dragon king Yongwang, who took human form and saved his human wife from the spirit that causes smallpox through singing and dancing. The dance is performed by five men each clad in one of the five colors representing cardinal directions known as obangsaek: white (west), blue (east), black (north), red (south) and yellow (center). This also represents the ohaeng, or “five elements” – the title of the upcoming performance. It’s a mask dance that has been handed down for over a thousand years from the Silla Kingdom (57 B.C – A. D. 935).

“Our body, the earth and the universe all need to naturally flow and circulate. If there’s a problem with just one part of our body, the whole body is in pain. It’s the same with the earth and the universe, I believe. I think we should stop this rapid industrialization and take a look at the attitude our ancestors had toward nature and think about how to recover from this disaster. I believe the restoration of one’s daily life is possible only when the flow of universe returns back to normal.”

In the final third act of the performance, a female dancer appears on stage to express the restfulness of her daily life. Sohn says this is the “restored future.”

Though it’s “traditional dance,” Sohn said the work itself looks nothing like tradition.

The costumes aren't hanbok, or Korean traditional dress. Instead, the dancers appear in modern-looking clothing. The stage won’t have any drapes using the five colors of obangsaek. Even the music, despite using only traditional Korean instruments, sounds very contemporary. 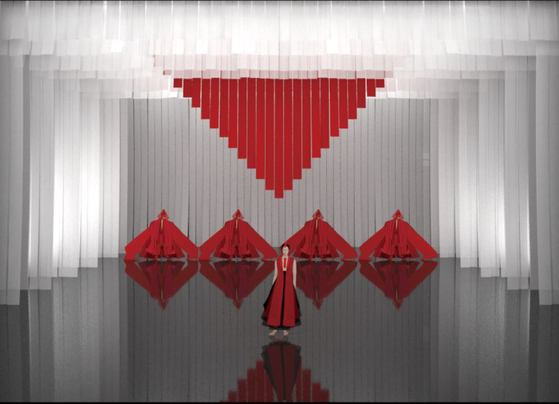 A concept photograph of what the stage of ″Daseot Oh″ would look like in the second act. [NATIONAL DANCE COMPANY OF KOREA]


At first glance, people may misunderstand it as a performance from a contemporary dance troupe. But Sohn says audience members will be able to tell the traditional Korean dance moves throughout the performance.

“To show what traditional Korean dance is, we don't have to be so obsessed with using everything traditional, ranging from traditional costumes to traditional music,” said Sohn. “The main difference between western and Korean dance, I think, is the breath. We breathe differently. I think most Korean traditional performing arts genres have the same breathing style. It has this unique energy and depth. There’s that breath in pansori (traditional Korean narrative singing), in playing piri (Korean flute) and in traditional Korean dancing. You start strong and then, using that power, there’s speed and this weightlessness. It’s really difficult to explain in words. You just have to experience it.”

“In Koreans, there’s this sensibility that no other ethnicity can imitate,” said Sohn. “I say this because I’ve witnessed a lot while studying and teaching different dancers from across the world in the United States,  I’ve realized that this ‘thing’ that Korean traditional dancers have can’t be trained overnight. It’s achieved through long and arduous training while observing and living in the culture.”

That is why the age range of dancers at the National Dance Company of Korea is quite large, with the youngest members in their mid 20s and oldest members aged over 50.

“Especially for Korean traditional dance, dancers need to go through this long period of training to reach a certain point of ‘ripeness,’” said Sohn. “Young dancers can never reach this even through intense training because it’s only achieved with time. In that sense, such diversity in dancers, who can express different emotions, the vitality and the full ripeness, if you know what I mean, is another strength of our company.”

For Korean dance to grab global attention, it should maximize this unique identity that Korean dancers have, Sohn said, rather than dressing up the stage or the dancers with traditional objects. 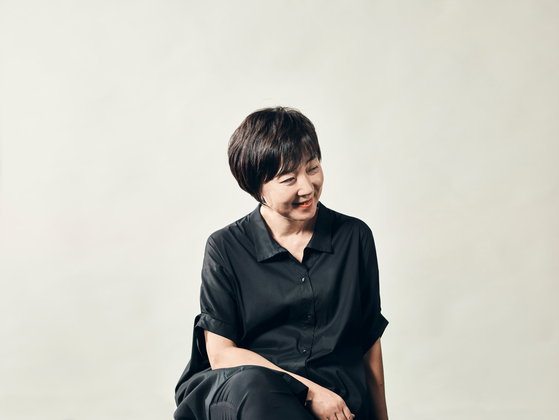 
According to Sohn, now that she’s the artistic director of the National Dance Company of Korea, her previous experiences in the U.S. - studying dance at Columbia University and eventually teaching Korean dance there as well as at Queens College of the City University of New York - has made her realize that her company has great potential on the global scene.

“I always stress to my dancers that we should practice and rehearse for global audiences although the works are being staged in Korea,” said Sohn. “I also think on a global level when I create works. I don’t choreograph thinking it’s only a show for Koreans.”

Sohn says she well remembers the day she saw Stuttgart Ballet dancer Kang Sue-jin’s performance of “Onegin” at Lincoln Center in 1997. Kang is currently the artistic director of the Korea National Ballet.

“I think she was playing Tatiana for the first time in the U.S. and that show made her a world star,” said Sohn. “I was sitting quite far back and I could even see her expressing the emotions all the way to the tip of her hands. That’s the sensitivity that Korean dancers have, which is achieved through long and arduous training. That detail was so exquisite it still gives me chills.”

“We have so much to offer and that unique sensibility that no one else has,” Sohn added. “I’m not saying we are the best and what we have is the best. But I am certain that what we have is very different and so refreshing that though it looks so modern, it’s so traditional.”

As one of the three resident companies of the National Theater of Korea (NTOK), the dance company is kicking off the theater’s 2021-22 season with “Daseot Oh.” In November, Sohn will premiere a larger work she has choreographed titled, “See you, I’m Home,” which is about the culture of Korean shamans. 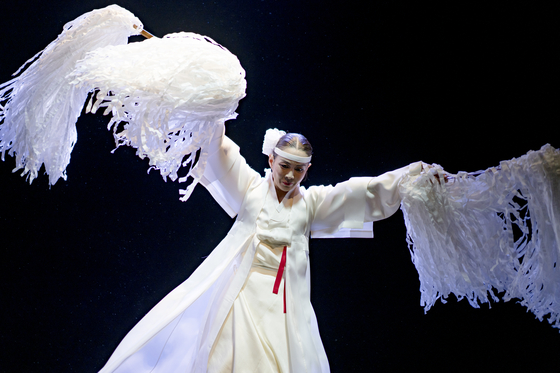 National Dance Company of Korea performs ″Solos and Duets″ from Dec. 3 to 4. [NTOK] 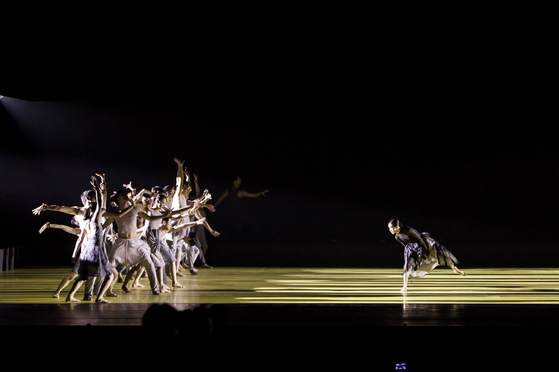 
In December, “Solos and Duets,” a collection of dancers showcasing traditional dances that have been reinterpreted in their own styles in solos and duets will be staged at the Daloreum Theater. For the new year, the company’s popular piece “New Day” will be staged from Jan. 29, followed by “Double Bill,” a collaboration with choreographers from the Korea National Contemporary Dance Company. In June, “Vortex” will be staged at the Haeoreum Grand Theater, “probably for the last time."

“We have a busy year ahead, but I really hope to start fostering choreographers within the company from next year,” said Sohn. “The budget is really tight to even stage new works at the moment but I hope the government can realize the need to support the arts troupes to draw global attention to this uniquely different K-dance.”