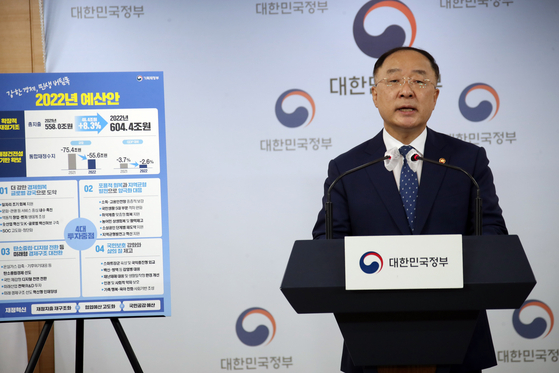 The 2022 budget is the first to exceed 600 trillion won ($519 billion), and total national debt is also hitting a record.

National debt is expected to exceed 1,000 trillion won for the first time next year.

With the government sticking to an expansionary fiscal policy and debt ballooning rapidly, people are likely to pay more in taxes.

The budget under the Moon Jae-in government has expanded aggressively.

During the five years under the current administration, the budget has increased 50 percent.

The budget during the Lee Myung-bak administration increased 32.5 percent, while the budget expanded 17.1 percent under Park Geun-hye, although her administration failed to complete its final year after Park was impeached. 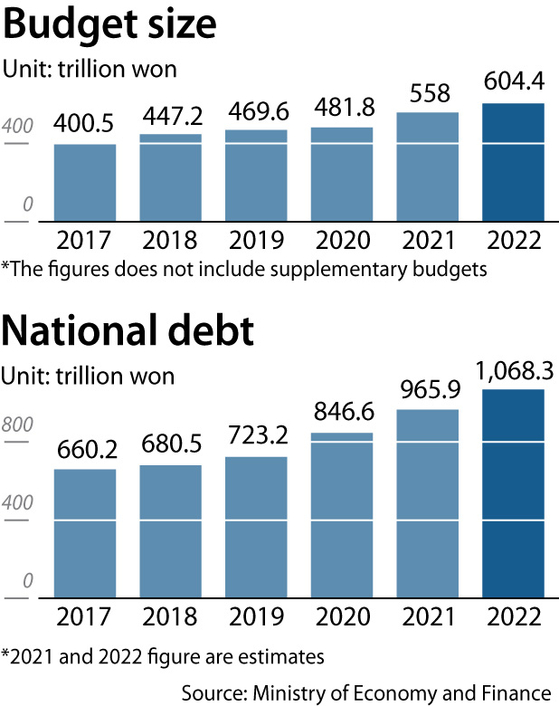 
While spending has dramatically increased, government income has not followed.

Government income including taxes under the Moon government grew at a slower pace, increasing 32.5 percent since 2017.

Unlike the previous governments, which tried to balance the budget, the Moon administration’s aggressive proposals have led to increasing deficits and an increase in national debt.

Despite the increase in income, a deficit of 55.6 trillion won will be posted.

The country has been reporting a deficit since 2019, and this deficit is adding to the national debt.

The government estimates that next year, the national debt will total 1,068.3 trillion won.

That’s 102.4 trillion won more than the estimated amount for the end of this year.

Korea’s national debt to GPD is estimated to hit 50.2 percent in 2022. That’s a 14.2 percentage point jump from the 36 percent during the first year of the Moon government.

The previous administrations have tried to keep the national-debt-to-GDP ratio below 40 percent. Since last year, the Moon government has ignored the informal cap.

The government is optimistic that the recovery will lead to a higher tax take.

The target for taxes collected next year is set at 338.6 trillion won. This is up from this year’s 282.7-trillion-won target, which is 19.8 percent more.  When compared to the revised target for this year, the tax target is up 7.8 percent

Next year, taxes as a percent of GDP are expected to hit 20.7 percent. That is the first time above 20 percent.

For this year, the ratio is estimated at 18.7 percent, while last year it was 19.2 percent.
When social security contributions are included, the ratio is 28.6 percent.

Although lower than the OECD average of 24.9 percent, it has increased rapidly under the current administration.

But as the government is projecting the economy to expand 3 percent next year, there are doubts as to whether it will be able to achieve its tax target, which is nearly a 20 percent increase from this year’s.

The U.S. tapering as well as the rise of Korean interest rates are also considered to be major factors in economic growth.
The government stressed that the expansionary budget is inevitable even with growing debt.

“We have decided to continue with an expansionary budget in order to achieve an economic recovery by completely ending Covid-19, fighting against widening gaps and establishing infrastructure in becoming a leading country,” said Ahn Do-geol, Vice Finance Minister.

The government emphasized that once the economy recovers it will be able to collect more taxes.