The budget was awash in red ink in the first half of the year, with the shortfall during that period more than twice the shortfall recorded for the full year of 2019.

According to a report released Tuesday by the Ministry of Economy and Finance, the operational fiscal balance, which is the consolidated budget balance minus social security costs, was a negative 110.5 trillion won ($93.3 billion) in the January-June period, compared with a minus 54.4 trillion won last year.

The first half figure was a record.

Korea's total tax revenue in the first half was 226 trillion won, down 9 percent on year.

Tax revenues shrunk dramatically. The total tax take in the January-June period was 132.9 trillion won, which is 23.3 trillion won less than the amount collected during the same period in the previous year. The government claims the actual difference is much less, around 11.4 trillion won, considering uncollected taxes from those who received Covid-19 tax benefits.

Spending hit 316 trillion won in the January-June period. This is up 31.4 trillion won, or 10 percent, from the same period last year. Much of spending went to emergency disaster relief in May and job-related stipends.

The total national debt as of June was 764.1 trillion won. If the additional debt accumulated from the third supplementary budget is added, the debt-to-GDP ratio is 43.5 percent.

Amid dismal figures, the government says that the deficit spike is temporary and total amount will soon drop back.

“The national budget is stressed from an increase in expenditure and a decrease in tax revenue from the coronavirus pandemic,” said Kang Mi-ja, an official from the Ministry of Economy and Finance.

“The prolonged heavy rain has caused more than 40 deaths and the displacement of 7,000. The DP and the government will hold a high-level meeting to discuss the possibility of passing another supplementary budget or using reserved funds,” said Lee.

Park Kwang-on, a DP member of the Supreme Council, also voiced the need for the government to consider another supplementary budget, saying the “2 trillion won of reserved funds may not be enough,” therefore the DP should suggest the government pass an extra budget to prevent the situation from getting worse.

The opposition United Future Party also chimed in, with lawmaker Kim Jong-in saying "an extra budget is necessary considering the amount of damage." This has raised the chances for the topic to be discussed at the upcoming provisional session at the national assembly. If the two sides reach an agreement, it will be the second time since 1961 for the National Assembly to pass four supplementary budgets within a year. 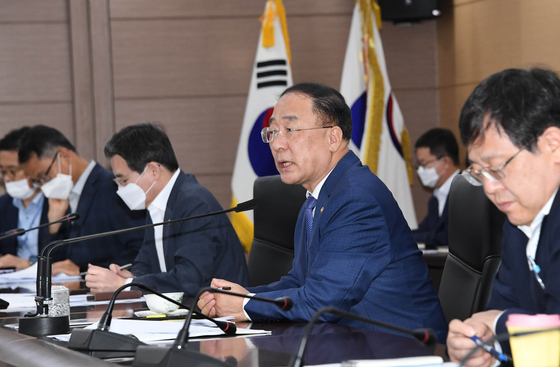 Finance Minister Hong Nam-ki speaks at a meeting with the Ministry of Economy and Finance. [NEWS1]


Top officials may not be on the same page.

Finance Minister Hong Nam-ki expressed a degree of disapproval and said the government has done enough when he was asked by the press Monday about what he thought of passing another supplementary budget.

“It takes more than a year to restore infrastructures, such as ports or bridges, and it would not be late to shift those tasks to next year’s budget planning,” he added.

President Moon Jae-in did not mention the issue during his high-level meeting Tuesday and said the government will use all “the funds reserved and saved for national disasters” to help victims.