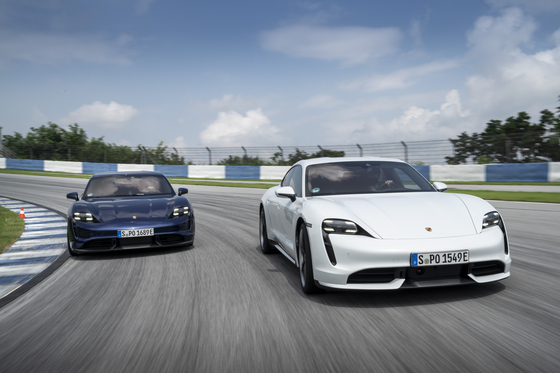 In a fast-evolving EV market, battery companies are in a race to be the first to reach 600 kilometers (372.8 miles) on a single charge.

Batteries manufactured by Korea’s top three battery makers — LG Energy Solution, SK Innovation and Samsung SDI — are lithium-ion batteries, where electricity is made by lithium ions moving from the negative electrode to the positive electrode and back. 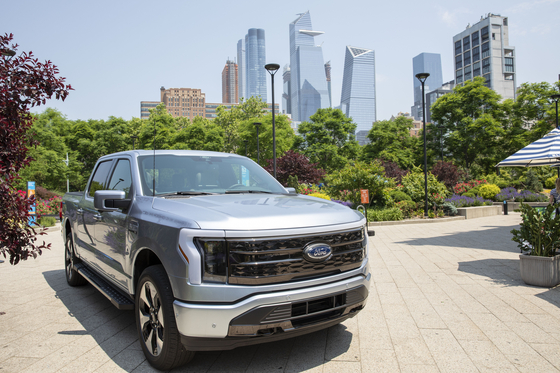 All-Electric Ford F-150 Lightning is on display on May 26 in New York City after being revealed the previous week. F-150 Lightning is a pillar of the company's more than $22 billion global electric vehicle plan to lead electrification in areas of strength. F-150 Lightning will roll off the line next year at a new high-tech factory using sustainable manufacturing practices at Ford's storied Rouge complex in Dearborn just outside Detroit. [AP/YONHAP]

Of all the components, nickel plays the biggest part in achieving higher energy density. The three Korean battery companies make what are called high-nickel batteries, with cathodes that are more than 80 percent nickel. This has allowed for them to cut down on the use of cobalt, which is pricier compared to the other materials.

According to LG Energy Solution, it will start manufacturing the 4-component NCMA batteries by the first half of next year. The NCMA batteries will use even less cobalt by adding aluminum and increasing the proportion of nickel in the cathode materials by 90 percent. It will first provide the batteries to General Motors (GM), its longtime partner.

“With our joint venture with LG, who is a valued partner, we’re going to be able to combine their expertise with our expertise, so I have a lot of confidence in our Ultium platform,” said GM’s CEO Mary Barra, despite the massive recall of the Chevy Bolt EVs due to possibly defective batteries.

The Ultium is an EV battery system jointly developed by LG Energy Solution and GM. 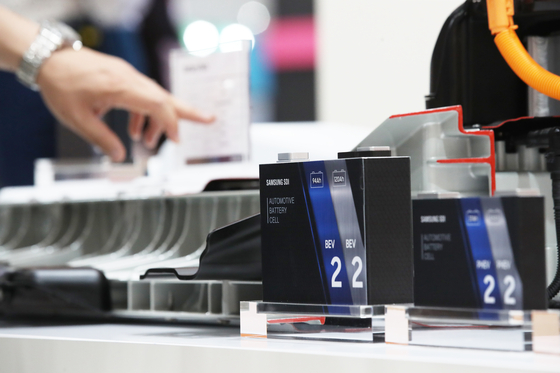 Battery packages manufactured by Samsung SDI for electric vehicles (EVs) are on display at the ″InterBattery 2021″ exhibition held at Coex, southern Seoul, on June 9. [YONHAP]

Samsung SDI will also prepare itself for “Gen. 5,” or the fifth generation, batteries by the end of this year, in which the nickel ratio will be 88 percent. Fifth-generation batteries can travel 480 kilometers, 80 percent of the full capacity, with just 15 minutes of charging.

The high-nickel batteries manufactured by SK Innovation will be installed on Ford’s first electric pickup truck, the F-150 Lightning model, which will come out next year. The batteries have 88-perecent nickel ratio, according to Lee Jon-ha, head of the battery development center at SK Innovation. The company will increase the percentage of nickel to 94 percent by 2025.

The number of reservations for Ford F-150 pickups has broken 120,000, according to Ford.

Other research is being undertaken the three Korean battery companies.

Professor Cho Jae-phil at the school of energy and chemical engineering at the Ulsan National Institute of Science and Technology (Unist) recently announced that his team has developed high-nickel batteries which are 98 percent nickel. This is the highest proportion ever reached in Korea. Before, it was 94 percent.

“There are some Chinese battery companies that have surpassed Korean technologies, depending on what components they use in their manufacturing process,” said Park Chul-wan, a professor at the department of car engineering at Seojeong University. “If Korean companies are opting for high-nickel battery development, they must make sure that they minimize of high-cost cobalt so that their production cost is reduced.”