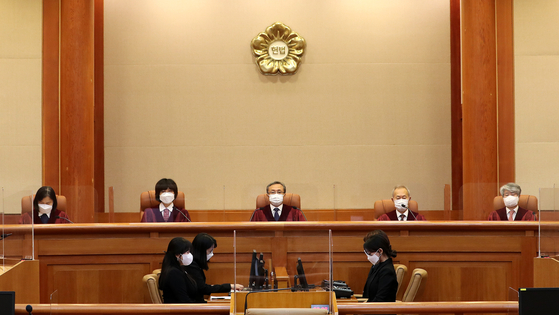 Constitutional justices sit to announce their ruling on a constitutional petition filed by a Korean conscripted by Japan during the colonial period and convicted as a war criminal. [NEWS1]


The Constitutional Court on Tuesday rejected a complaint filed by a group of Korean war criminals from the Japanese colonization period that the government had violated their constitutional rights by making no effort to help them receive compensation from Japan.

The court, in a 5-4 vote, rejected the constitutional complaint filed by the late Lee Hak-rae, who headed a group with other former war criminals from Korea, to seek redress from Japan and restore their honors. In 2014, Lee and his family filed the complaint to Korea’s Constitutional Court, arguing that the Korean government was required to resolve their issues and its inaction had subsequently violated their basic rights. 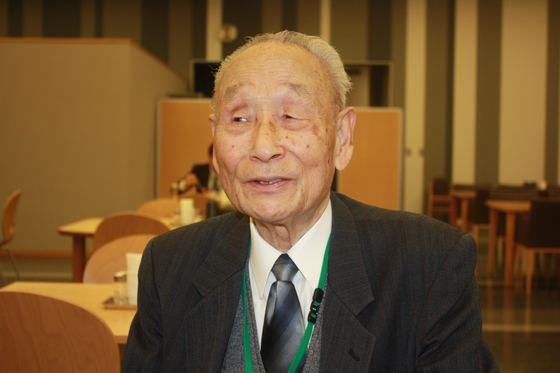 
Lee, who died in Tokyo in March at the age of 96, was the last surviving Korean war criminal from World War II. After Japan’s surrender in 1945, 148 Korean conscripts were convicted of war crimes by Allied military courts. Lee and 147 others who were conscripted by Japan and served as guards of prisoners of war in Southeast Asian prisons during the war were later convicted of Class B or Class C war crimes.

Lee was convicted and sentenced to death in Singapore. After his death sentence was commuted, he was transferred to a prison in Tokyo and released in 1956. He was unable to return to Korea due to his stigma as a war criminal and an ally of the Japanese colonial government.

He then formed a group with other former Korean war criminals and filed lawsuits against the Japanese government to seek compensation. They lost all their lawsuits.

Japan insisted that the compensation issue had been settled with the 1965 Claims Settlement Agreement between the two countries. But diplomatic documents released in 2005 revealed that Tokyo told Seoul it would consider the issue of the Korean war criminals separately.

Lee and his family then filed the constitutional petition in 2014 claiming that the Korean government’s inaction toward helping former Korean war criminals is unconstitutional.

The Constitutional Court rejected the complaint on Tuesday, concluding that the compensation issue of the Korean war criminals is different from those of the victims of Japan’s wartime sexual slavery and the Korean A-bomb victims.

The court said the war tribunals that convicted them are responsible for their issues, not the Japanese government. The convictions rendered by the international war tribunals are effective worldwide and in Korea, and the Korean government has no legal responsibility to settle their issue, the court concluded.

The court did note that the victims indeed suffered damages by Japan’s conscription, and the Korean government recognized them in 2006 as victims of the colonial government’s forcible mobilization.

Although the court did reject the case with a 5-4 vote, that means four judges still said the Korean government’s inaction was unconstitutional. They said the Korean war criminals suffered damages due to Japan’s forced conscription, and their issues are essentially no different from the Korean victims of Japan’s wartime sexual slavery and forced labor.

In 2011, the Constitutional Court made a landmark ruling, saying it was unconstitutional when the government failed to make specific efforts to resolve the dispute with Japan over the former colonial ruler’s refusal to compensate Korean victims forced to sexual slavery during its 1910-45 rule over the Korean Peninsula. At the time, the court ruled in a 6-3 vote that the government had violated the basic rights of the former “comfort women” by its lack of action.