U.S. defense bill for 2022 may not ensure minimal troops in Korea

U.S. defense bill for 2022 may not ensure minimal troops in Korea 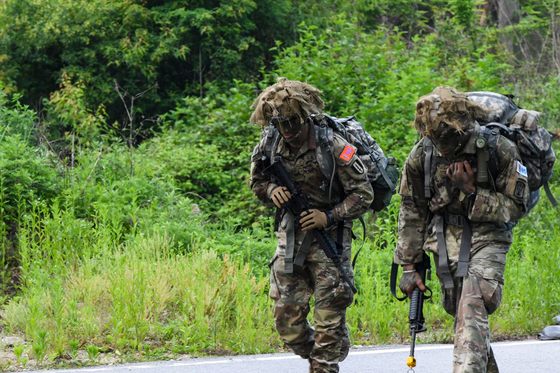 Members of the U.S. Armed Forces in Korea in training in Dongducheon, Gyeonggi, in June 2020. [THE EIGHTH U.S. ARMY]


The American defense budget bill for 2022 may not include a clause limiting the reduction of U.S. forces in Korea, which would be a first in years, according to the latest proposal put forward by the House Armed Services Committee.

“None of the funds authorized to be appropriated by this Act may be used to reduce the total number of members of the Armed Forces serving on active duty who are deployed to South Korea below 28,500,” reads the clause included in the bill for 2021.

The bill for 2022 will go through several procedures, and different versions of it will be proposed until the bill is finalized for voting at the House and Senate.

The process is still in its early stages, with House Armed Services Committee Chairman Adam Smith’s version of the bill released on Monday.

This version does not contain the limitation on the reduction of U.S. troops in Korea.

Clause in the National Defense Authorization Act 2021 about limitations on the use of funds appropriated by the act to reduce U.S. forces in Korea. [SCREEN CAPTURE]


When asked why, in a conversation with the Brookings Institute, a think-tank based in Washington, Rep. Smith on Tuesday said that “we don’t need it while President [Joe] Biden is in the White House,” adding that he agrees with a point the Brookings commentator made, that the bill contained the clause in previous years because former U.S. President Donald Trump often spoke of pulling out the forces from Korea.

“If we didn’t have the presence we have in South Korea, North Korea would have invaded a long time ago,” Smith said in the conversation with the Brookings. “Look at the economic and political freedom that has been developed in South Korea and look at the human conditions there versus the human conditions in North Korea. That should tell you everything you need to know about why we’re trying to deter those five groups that I keep mentioning.”

Earlier in the talk, Smith spoke of Russia, China, Iran, North Korea and trans-national terrorist groups as “our adversaries … [who] do not believe in economic and political freedom.”

Smith added that the current proposed version is not the final draft, and that amendments will follow, after which the clause restricting reduction of U.S. forces in Korea may be included. 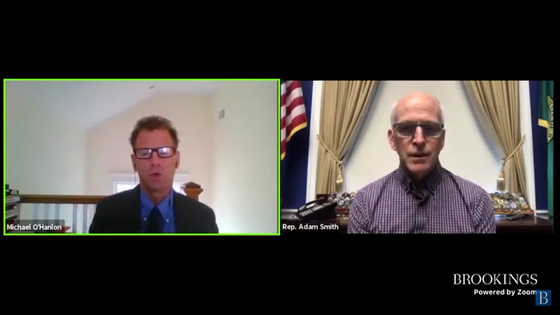 
After the recent American pull-out of troops from Afghanistan, a decision for which was announced during the Trump administration, a number of experts in Korea raised questions on whether the United States might consider pulling out of other regions in the world, such as those around Asia. The largest American military bases in Asia are located in Japan and Korea.

The White House dismissed the concerns since, stating the U.S. has no intention of decreasing the forces in Korea or around Europe.

Korea’s nuclear envoy Noh Kyu-duk, who is in Washington on a visit to meet with his counterpart U.S. nuclear envoy Sung Kim, confirmed he was assured of U.S. priorities on Korea.

“In my visit I confirmed that the Joe Biden administration recognizes the urgency of the North Korean nuclear issue and is going to address it as a priority,” Noh told a group of Korean journalists based in Washington on Tuesday. “The United States remains firmly committed to a forward-looking, creative, flexible and open stance to resume dialogue with North Korea.”

The Biden administration has proposed dialogue with Pyongyang on several occasions since February through the North Korean mission to the United States, or the so-called New York channel. On visits to Seoul in July and again on Aug. 23, U.S. nuclear envoy Kim offered Pyongyang dialogue, “anytime, anywhere,” without conditions.

There are around 28,500 American troops in the country, for whose maintenance Seoul and Washington decided on a new defense cost-sharing deal, known as the Special Measures Agreement (SMA), in March.

The new SMA was ratified at the National Assembly on Tuesday.