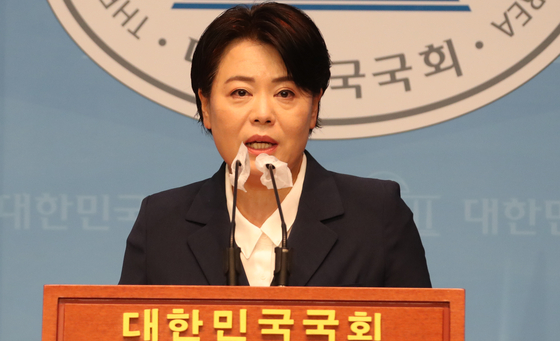 Rep. Yun Hee-suk of the People Power Party announces her decision to resign on Aug. 25 in a press conference at the National Assembly. [YONHAP]


The National Assembly is expected to hold a vote this month on the resignation offered by Rep. Yun Hee-suk of the People Power Party (PPP), who decided to give up her post over her father’s alleged illegal land purchase.

Rep. Kim Gi-hyeon, floor leader of the PPP, told MBC Radio on Wednesday that Yun is adamant about her decision to step down. “I have telephoned her and met her in person to change her decision, but there is no possibility that she will back down,” Kim said, adding that he wants this issue to be concluded as soon as possible.

According to the agreement between the ruling Democratic Party (DP) and the main opposition PPP, the National Assembly is scheduled to hold plenary sessions on Sept. 8, 9, 13, 14, 15, 16, 27 and 29.

The DP’s floor leader, Rep. Yun Ho-jung, also told MBC Radio that the ruling party will not obstruct the voting on Yoon’s resignation. “If the opposition party wants to vote on it, we will follow,” he said. “She submitted her resignation, and it was supposed to be voted on during a plenary session. If the opposition wants a vote, we will participate.”

PPP Rep. Yun handed over her resignation to speaker Park Byeong-seug on Aug. 25.

Her decision followed the Anti-Corruption and Civil Rights Commission’s announcement that her father had violated a law governing farm land.

She is the only lawmaker who has offered to resign since the corruption watchdog conducted two sets of probes on representatives and their families’ real estate dealings. The first probe into the DP discovered 16 cases of suspicions transactions concerning 12 lawmakers, and the second probe showed 14 cases involving 12 PPP lawmakers and one Open Minjoo Party representative.

No others aside from Yun have expressed an intention to step down. Yun said she will submit to the Corruption Investigation Office’s probe into the suspicion surrounding her father. She also pressured some DP lawmakers to resign for attacking her.

It remains to be seen whether the DP will use its majority to sanction Yun’s resignation, since it has criticized her action as a political trick. Floor leader Yun of the DP said the party will let each individual lawmaker vote freely on the resignation motion.

According to a PPP source, Yun already emptied out her office in the National Assembly.

Time to reinvent the NEC (KOR)

Time to reinvent the NEC

The NEC chief must resign