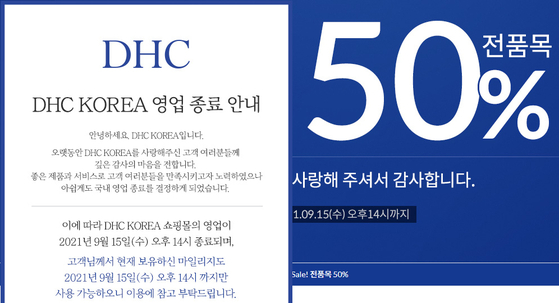 DHC Korea announces exit from market on Sept. 15 on its website. [SCREEN CAPTURE]

Its local unit, DHC Korea, announced the move on its website Wednesday.

The company said it “tried to satisfy consumers with good products and services, but is regretfully closing.”

The announcement was made two years after Koreans started informally boycotting Japanese products in July 2019 after Japan imposed tighter restrictions on exports to Korea of three key materials essential to making semiconductors and displays.

DHC was targeted in particular after DHC TV, its beauty TV channel, broadcast a series of offensive remarks made by panelists about Koreans.

They said Koreans are forgetful by nature and described the boycott of Japanese products as a “childish act.”

The panelists also claimed that hangul was standardized by Japan and denounced Korean artwork depicting women forced into sexual slavery by the Imperial Japanese Army during World War II.

It was found that the chairman said in 2016 that ethnic Koreans living in Japan should “go back to their home country.”

He used a racial slur to describe ethnic Korean residents in Japan in a post issued in November on the company's website to claim that DHC's supplements were superior to those by rival companies, according to a report from the Asahi Shimbun.

DHC Korea apologized for the statements made on DHC TV in 2019, saying that the Korean unit does not agree with the remarks.

The company’s products were pulled from major health and beauty store franchises, including Olive Young and Lalavla, in August 2019.

It made a name for itself with a deep cleansing oil.

DHC Korea’s annual sales are estimated to have hit around 10 billion won ($8.5 million) in its peak years, according to local media reports.

Other Japanese companies that suffered from the informal boycott include Shu Uemura, a beauty brand of L’Oreal Group that was established by a Japanese makeup artist.

Shu Uemura announced in March it would exit the country after 16 years.

The Korean unit of Sapporo’s Royce’ Chocolate shuttered its operations in Korea in March last year.