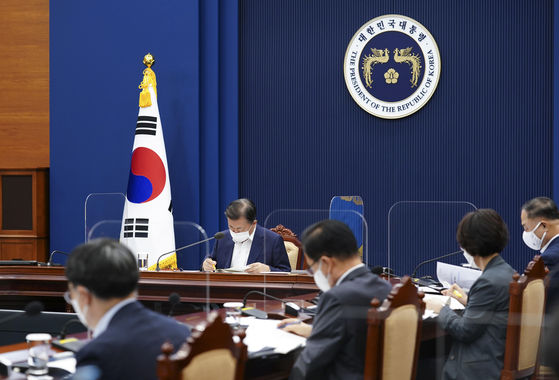 President Moon Jae-in receives a report on carbon neutrality at the Blue House on Thursday. [YONHAP]


Korea recently passed new legislation to achieve a 35 percent reduction in carbon emissions by 2030, which is now facing countering criticisms from business groups and civic groups that say it either goes too far, or does not go far enough.

Passed by the National Assembly last Tuesday, the Carbon Neutrality and Green Growth Act — also called the Climate Change Response Act — stipulates the goal of reducing greenhouse gases by at least 35 percent compared to the country’s 2018 emissions by 2030 and reaching net zero emissions by 2050.

Greenhouse gas emissions for 2020 measured approximately 648.6 million tons, down 10.9 percent from 2018, according to the Greenhouse Gas Inventory and Research Center run by the Ministry of Environment.

The law makes Korea the 14th country in the world to legislate an ultimate goal of carbon neutrality and an emissions reduction framework, following the example set by countries including Canada, France, Germany, Ireland, Japan, New Zealand, Spain, Sweden and Britain.

The figure of 35 percent is 8.7 percentage points higher than the previously existing target of a 26.3 percent reduction compared to 2018. However, should a linear reduction in greenhouse gases be achieved from 2018 onwards, the actual target for 2030 would be closer to 37.5 percent.

The law further stipulates that the government should set detailed annual reduction targets for each industry sector and balance the impact of reduced emissions on national energy policies and finances.

To assist industries and businesses that are expected to be affected by the emissions reduction policy, a new climate response fund has also been established to support the transformation of existing industrial structures and processes.

However, the law has faced severe criticism from both business and environmental groups since it was endorsed by the National Assembly’s Environment and Labor Committee on Aug. 19.

Industry groups in particular expressed concerns that the new requirements would hurt the competitiveness of the country’s major industries, which heavily rely on the manufacturing sector, and excessively burden the economy.

The Korea Industry Alliance Forum (KIAF) held an online seminar on Aug. 30, where it said that "the reality of the industrial sector requires more breathing space in terms of time and policy adjustments."

Cho Kyung-seok, executive director of the Korea Iron and Steel Association, said, "A rapid carbon reduction goal for the steel industry raises many concerns about output reduction. It could affect related industries such as shipbuilding and automobiles, resulting in production disruptions and cuts in employment.”

However, environmental groups denounced the minimum goal of cutting down greenhouse gas emissions by 35 percent by 2030, saying the target is too low to cope with the pace of the climate crisis.

The Intergovernmental Panel on Climate Change, established by the United Nations and the World Meteorological Organization to provide scientific assessments on climate change, announced in 2018 that the entire world would have to achieve carbon neutrality by 2050 to limit global warming by 1.5 degrees Celsius (2.7 degrees Fahrenheit) above pre-industrial levels — entailing a 45 percent in carbon reductions by 2030.

Greenpeace Korea said in a Tuesday statement, “It is meaningful to legislate carbon neutrality as a national goal. However, it is disappointing that the 2030 goal does not meet international and scientific standards.”

Korea to reduce ultrafine dust levels by a third over decade