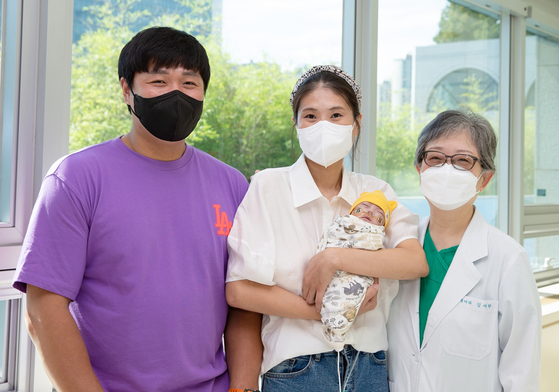 Asan Medical Center's Prof. Kim Ellen Ai-rhan, far right, and the parents of baby Gun-woo pose for a picture at the medical center in southern Seoul on Monday. Gun-woo, the smallest premature baby to survive in Korea, was discharged from the hospital after five months of intensive care. [ASAN MEDICAL CENTER]

Gun-woo was born prematurely on April 4, around 15 weeks before his due date, and at the time was unable to breathe himself as his lungs were not yet fully developed and his heart rate was also unstable. Being just one-10th of the size of the average baby, weighing in at 288 grams (10 ounces, or 0.6 pounds) and measuring in at 23.5 centimeters (9.3 inches), experts at the hospital predicted that he had a 1 percent chance of surviving.

The baby boy’s doctor, Prof. Kim Ellen Ai-rhan of the Department of Neonatology at Asan Medical Center, said she was determined not just to save Gun-woo but to “save him well,” so that he can grow without developing any complications.

Gun-woo showed improvements at every critical moment in his journey.

At one point, Gun-woo suffered from enteritis, a common disease in preemies characterized by inflammation of the intestines, and had to be carefully fed through a tube for about a week, but eventually overcame it safely.

A month after he was born, Gun-woo's heart suddenly stopped beating and he had to undergo emergency CPR.

He also went through complications such as pulmonary hypertension and retinopathy of prematurity, but was treated with medication and surgery before being discharged.

Gun-woo's parents traveled a total of 14,000 kilometers (8,700 miles) in five months to help their baby boy. Once or twice a week for five months, they would leave their home in Haman, South Gyeongsang, at 3 a.m. to deliver breast milk which the mother would pump during the car ride to the hospital in Seoul, where Gun-woo was being treated.

Then, 80 days after he was born, Gun-woo weighed 1 kilogram (2.2 pounds) and no longer needed a medical ventilator. By four and a half months, he was moved out of the incubator, and by the time he reached five months of age, he weighed more than 2 kilograms.

“Gun-woo is a child who came to us like a blessing, and we really wanted to protect him from any crisis,” Gun-woo's mother, Lee Seo-eun, 38, said.

“We are just grateful that we’re able to hold a healthy Gun-woo in our arms thanks to the medical staff at the maternity and neonatology units at Asan Medical Center,” Lee said. “He was born the smallest, but we will raise him as the healthiest, and as a child with a big heart.”

Professor Kim said, “Gun-woo was a child who always made the neonatology staff worried and anxious, but at the same time, he was a young teacher who reminded us of the greatness and gratitude of life.

Gun-woo will be listed as No. 32 on the University of Iowa’s Tiniest Babies Registry, a record of premature survivors from around the world.