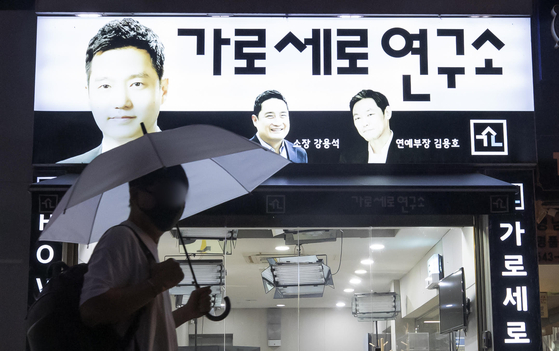 
When police on Tuesday arrested three prominent speakers and operators of the popular political YouTube channel "Garosero Research Institute," the YouTubers did what they usually do — report live on their unfolding arrest.

As investigators from the Gangnam Police Precinct in southern Seoul visited each of the YouTubers’ homes on Tuesday evening to arrest lawyer Kang Yong-seok, former MBC reporter Kim Se-eui, and YouTuber Kim Yong-ho, Kang and former reporter Kim documented the arrest process and uploaded it to the Internet almost immediately.

In an age where everything from the unpacking of the latest beauty products to street protests are livestreamed on the Internet, perhaps it was only a matter of time before police arrests also became the subject of real-time broadcasts online.

In the video, former reporter Kim holds a camera confronting the officers as they broke down his front door to take him into custody.

“You’ve have broken into my home,” Kim says in the video as police officers enter his apartment. “What is your name?”

Kang, who calls himself the director of the channel, also recorded his arrest.

In his video, investigators can be seen showing Kang the warrant.

In all, a total of seven videos were released on YouTube by the channel, also known by its Korean abbreviation “Ga Se-yeon,” including one called “[Breaking News] Scene of Kim Se-eui’s arrest” and another called “[Breaking News] Kang Yong-seok is arrested by investigators from the second cyber-crime division of Gangnam Police Precinct.”

The two videos alone garnered over 700,000 views by Wednesday afternoon.

During his standoff with the police, former reporter Kim wrote on his YouTube channel bulletin board that he would “fight” his arrest, adding, “[This arrest] is because of the defamation case involving Cho Kuk's daughter and Lee In-young's son.”

As they arrested Kim, police cited seven people who had filed charges of online defamation and public insult against him, including former Justice Minister Cho Kuk, his two children, Unification Minister Lee In-young and his son.

The Ga Se-yeon YouTubers have previously aired suspicions about Cho Kuk’s family through their channel — often making outlandish charges about their private affairs.

In a video from August 2020, they claimed that money from the Chinese Communist Party entered private equity funds run by Cho's family and also claimed that his daughter, who had been the subject of political controversy due to accusations of preferential treatment in university admissions, drives an expensive red foreign vehicle.

In response, Cho sued the three members of Ga Se-yeon claiming 300 million won ($257,000) in damages apart from a criminal complaint of defamation. In a press release, Cho said that the channel “spread obviously false information not only about [himself], but also about his children using insulting expressions and images.”

Concerning Unification Minister Lee, Ga Se-yeon aired nepotism allegations about Lee and his son in July 2020, claiming, “The reason why Lee's son served as the head of the working group of the Seoul Foundation was because Lee asked the former Mayor Park Won-soon.”

The channel also raised suspicions of corruption playing a part in Lee’s son’ exemption from military service, which Lee explained was due to medical conditions related to his spine.

Former lawyer Kim told the JoongAng Ilbo in a phone interview on Tuesday, “I believe (the current administration) is trying to tame Ga Se-yeon,” saying that he has “no intention” of cooperating with the police investigation.

“[The police] said they are tracking my location in real time, but isn't it funny that they are doing it because of a defamation case? This isn’t an authoritarian country.”