No time for negative campaigns

No time for negative campaigns 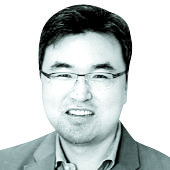 The author is a professor of political science at Hankuk University of Foreign Studies and a member of the JoongAng Ilbo’s “Reset Korea” project.


Only six months are left until the next presidential election on March 9. But campaigns of candidates from major political parties appear to be detached from reality particularly for a number of undecided voters. The election to be held before the end of the Covid-19 crisis carries great significance as its voters will elect a head of state who will lead the nation amid the emergency. Therefore, the campaign should be focused on overcoming the pandemic crisis and presenting clear visions and goals for the future. Yet what’s unfolding before voters’ eyes is very distant from people’s expectations.

The contest among presidential candidates in each party’s primary is as heated as ever. But the race is increasingly heated with slander aimed at other contestants — and never-ending self-praise of their own competitiveness in the final round of the election — instead of with hot debates on their platforms and visions. Candidates from both the ruling Democratic Party (DP) and opposition People Power Party (PPP) only underscore the need to take power for another five years or replace the sitting power controlled by the DP. On a multitude of undecided voters’ parts, however, it is not easy to find the grounds and basis to judge their real competitiveness.

If negative attacks are deepened from party primaries, it will likely trigger an even more polarized battle between the two camps and spike a severe social conflict. Candidates are tempted to use the strategy of dividing voters into friends and foes to get more votes, but it only helps alienate ordinary citizens from the election and push our society back to the past in which citizens were forced to choose the lesser evil.

Whenever an election is around the corner, political scientists highlight the need for candidates to stop negative attacks on rivals and talk about their platforms. The next election must be different from the past given the two-year-long uphill battle with the novel virus. After stringent social distancing rules have been enforced for nearly two years, the self-employed and mom-and-pop store owners keep shutting down their business. Considering the relatively high ratio of self-employed businesses in Korea, the pandemic crisis will certainly deal a critical blow to the fundamentals of our economy. 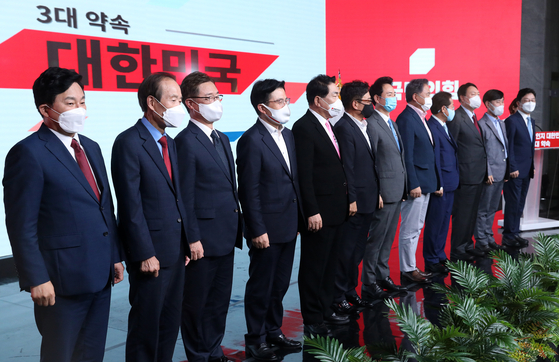 Contenders in the primary to elect the opposition People Power Party (PPP)’s presidential candidate pose before announcing their platforms in a studio in Seoul Tuesday. [JOINT PRESS CORPS]

That’s not all. As the government accelerates fiscal expansion to compensate financial losses of economic players and help the vulnerable class stay afloat after the pandemic-triggered impact deepens across the board, the country’s national debt is soaring. Skyrocketing real estate prices resulting from the government’ policy mistakes threaten the housing security of the middle class. On top of that, overall household debt is expected to reach a whopping 2,000 trillion won ($1,728 billion) pretty soon.

A bigger danger comes from outside. The ever-deepening hegemony war between the United States and China has become the new normal. At the end of the day, Korea, a country with high reliance on China in geopolitical and economic terms, will surely be pressured to choose between the two. Worse, the movement of de-globalization and nationalism in the post-pandemic era will deepen concerns of the Korean economy highly dependent on overseas markets for exports.

The election is very important for Koreans. I hope that the presidential candidates compete over who really presents an insightful and far-looking blueprint to address all the challenges the country faces — instead of hurling slurs at rivals — so that the people can cheer Korea for at least for another five years.