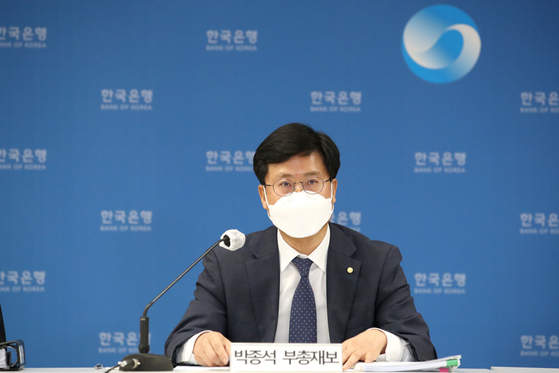 
The Bank of Korea signaled an additional interest rate hike within this year in a report Thursday, as both household debt and real estate prices keep growing.

According to the central bank’s quarterly monetary policy report, which includes a broad analysis of the bank’s latest decisions such as rate hike and future direction of its policies, the bank said it plans to “gradually adjust the level of easing in our monetary policies.”

This implies a stronger shift to monetary tightening than the language in its previous report. In the report published in June, the bank wrote that it will “maintain the current direction of accommodative monetary policies.”

“The statement that we plan to ‘adjust the level of easing’ already implies that our monetary policy is still accommodative […] even after the latest hike,” said Park Jong-seok, deputy governor of the central bank, during an online briefing Thursday.

“How many rate increases would be considered not accommodative would really depend on the condition of the economy, but what’s clear is that we’ve entered that phase where rates will be raised [from now on.]”

The bank upped the country’s key interest rate by 25 basis points to 0.75 percent during an August monetary policy board meeting. The board has two more meetings this year, in October and November. Some analysts suggest November as a likely time for another rate hike.

The BOK on Thursday backed its argument for another rate hike using a statistical model that showed a 25 basis point increase in the base interest rate would pull down the household debt growth rate by 0.4 percentage points and house price growth by 0.25 percentage points in the first year after implementation. Such a rate increase, at the same time, was expected to lower the country’s gross domestic product (GDP) growth by 0.1 percentage points.

The central bank noted in Thursday's report that “in the current economic situation, where the real economy is improving while household debt continues to increase, the impact on GDP growth and prices by a rate hike is likely to be less than what the model projected.”

The reported added that a rate hike would largely relieve financial imbalances in the country, which would in the long term contribute to stabilizing the macro economy.

Household debt and real estate prices in Korea have been growing dangerously fast as asset prices rise and people borrow to invest.

Korea’s debt-to-GDP ratio reached roughly 105 percent in the first quarter of 2021. That rate is the sixth highest among 43 countries that the Bank for International Settlements conducted research on. Household debt outgrew Korea's GDP for the first time at the end of the third quarter of 2020.

“Still there are limitations to resolving financial imbalances in the country solely by a rate hike,” Park said. “For the hike to make an impact, fiscal policies and real estate supplies must go together.”