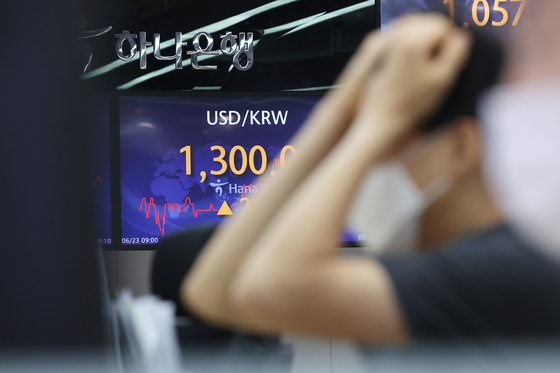 An electronic display board at Hana Bank in central Seoul shows the won touching 1,300 won per dollar on Thursday. [YONHAP]


The won declined to a 13-year low on Thursday after the U.S. Federal Reserve chairman acknowledged the chance of a recession.

The decline comes as stocks globally are in the midst of a rout and as cryptocurrencies melt down. Korea's Kospi is down more than 20 percent this year and the Kosdaq index 30 percent. Bitcoin has lost two-thirds of its value from the peak, and the Luna coin has lost almost 100 percent of its value.

In remarks to the Senate Banking Committee on Wednesday, Federal Reserve Chairman Jerome Powell acknowledged that recession is a possibility.

The Bank of Korea raised its base rate by a quarter percentage point in May to 1.75 percent. Gov. Rhee Chang-yong signaled further rate hikes, saying the current rate is still too low, but noted at a press conference on Tuesday that a weakening won doesn't necessarily call for intervention.

"The government will make efforts to stabilize the market if necessary to minimize the negative impacts, like market instability, from a weakened won," Choo said in a meeting with ministers in central Seoul on Thursday. He noted that other foreign currencies have also weakened against the dollar.

Korea had a currency swap deal with the United States from March 2020 to the last day of 2021. A new arrangement was a possible agenda item when U.S. President Joe Biden visited Korea in May, but the Korean government said it was not the right time as fundamentals were strong.

According to An Young-jin, an economist at SK Securities, on Thursday, "1,300 won could be the new normal."

An projected won to stay weak until the Fed ends monetary tightening and oil prices fall from an end to the Russia-Ukraine war or if Saudi Arabia agrees to increase oil production.

In Korea, consumer prices rose 5.4 percent on year May.

The producer price index in Korea was up 9.7 percent from a year earlier and up 0.5 percent on month in May, the Bank of Korea said on Thursday. The increase was led by livestock products and coal and petroleum products.

The Bank of Korea projects inflation to exceed five percent for some time and be at least 4 percent full-year 2022. Over the past two decades, annual inflation broke 4 percent in 2008 (4.7 percent) and in 2011 (4.0 percent).

Consumer prices in the United States climbed 8.6 percent in May on year, the most since 1981.