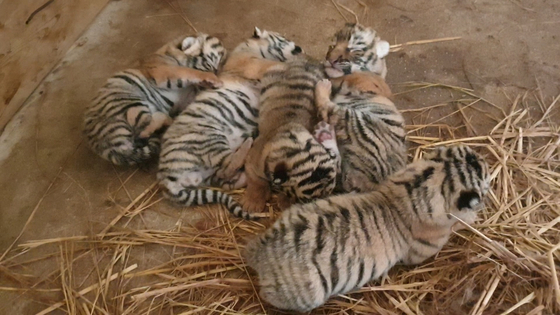 
Zoos and aquariums are now offering much more than exotic animals and ocean creatures.

Instead of dolphins jumping through rings, humans dress in costumes and equip themselves with oxygen tanks to present underwater performances at Lotte World Aquarium. Everland pushes for protection and preservation of rare species and focuses on breeding, like Korean tigers and pandas, and shares video footage of such animals going about their own daily routines instead of having them trained to perform tricks to entertain audiences.

Places that house animals now try to work as educational and research centers to respect the rights of the animals being kept there.

Gone are the days in the 1980s and '90s when zoos and theme parks would display animals purely for entertainment purposes, even allowing visitors to pet some of them.

The biggest changes seen in the zoo sector are those made at facilities run by central or regional governments or those funded by large corporations as they have switched their focus to preserving rare species from going extinct.

Korea saw five tigers born at the same time at Everland’s zoo in June; photos of which were released 50 days after they were born in August, while the video of the tigers being born went online last week.

The tiger cubs were designated as Grade 1 rare species under the Convention on International Trade in Endangered Species of Wild Flora and Fauna, as only about 1,000 of the species remain today. Tigers are known to give birth to an average of two or three cubs, so the five cubs born at Everland is a particularly rare case.

The cubs weighed about one kilogram (2.2 pounds) each when they were first born but have since grown to weigh up to six kilograms. The zoo, which had raised the parents born in 2016, makes the best use of its knowledge on how to take care of the tiger cubs. The cubs, who are already gathering fans with 57,000 views on the most recent video of them, may be ready to meet the public as early as the beginning of October. To engage fans further, Everland is asking the public to pitch ideas of names for the latest additions.

Everland employed similar tactics when a baby panda was born at the facility in July last year. Employees have been documenting Fubao since her birth on social media platforms like YouTube and Instagram. They film what she eats, how she sleeps and the mischievousness she gets up to, adding subtitles to the videos to incorporate a comical element.

One video of Fubao glued to the leg of a zookeeper uploaded eight months ago has a whopping 12 million views. Sometimes the photos and videos are snapshots from the zookeepers’ phone cameras, and some other times professionals film Fubao's daily life. Everland even published a photo book on how the baby panda has grown since its birth in July last year.

Pushed by the popularity of such content, Everland started making video featuring other animals that people might be interested, especially those that are born at the zoo.

“What we want to pursue is keeping the animal species diverse and educating children so that we can become more like an eco-park,” said an official from Everland. “Putting more effort into communication through social media is one way to keep animals close to people’s daily lives so that many can think more about how to keep their favorite animals protected.”

Besides posting content online, Everland also adopted “Animal Talk” to explain the characteristics of the animals it cares for. The change to such format was made gradually from 2010 so visitors could feel enough connection to animals whilst the animals were also protected over the years. Everland studied cases and programs done at zoos and theme parks overseas, as it went for a certification in 2019 issued by the Association of Zoos and Aquariums, one of the most prominent organizations in the world in terms of animal welfare and protection. For those who still want to feel the animals with their own hands, it has gathered some fur from the tigers from the ground and attached it to a photo of a tiger, although such program has been put on pause because of the pandemic.

For those who want to be more involved, Lotte World Aquarium offers an open-water scuba diving experience. Visitors don wetsuits and scuba gear to dive about 25 meters and get up close and personal with shoals of fish. For once in a lifetime experience, some even propose to their loved one underwater.

Given that it’s usually tranquil underwater without much resonating sound, the aquarium also suggests relaxing yoga classes while watching the tank filled with sea creatures swimming by. Or for those who find repetitive sound calming and entertaining, it offers a form of ASMR with sounds made by otters. Visitors can take guesses about what food the otters are eating by simply listening to the sounds.

“We are also trying to hold more activities on preserving marina species, such as a photo exhibition of aquarists who have worked with marine creatures for long here,” said an official from Lotte World Aquarium.

It has also succeeded in breeding its penguins, and will upload YouTube videos on the nine new chicks who are now three months old.

Even the government has taken a step to enhance the lives of animals and sea creatures that are kept in zoos, theme parks and aquariums. The Ministry of Environment, along with the Ministry of Oceans and Fisheries, made its first five-year plan in December last year on how to operate and advise zoos and aquariums so that more wild life can be preserved and researched and the general public can avail of newfound information.

“While many countries overseas are trying to recreate the wildlife for animals, zoos in Korea still do more of a display of the animals for entertainment rather than providing proper care and security,” said the Ministry of Environment.

“Since 2017 when zoos with more than 50 animals or 10 different species of animals have to register in the system, the number of private zoos increased, including the ones that keep animals indoors only. So we are setting up a plan to foster more zoos as exemplary cases where biodiversity is kept and studied.”

Currently there are 110 zoos in Korea: Twenty are operated by state-run institutes while the rest are run by private entities. The visitors to such places were about 34.65 million in 2019, up by 7.5-fold from 4.65 million in 1980. Korea’s first zoo, Changgyeongwon, located inside the Changgyeong Palace in central Seoul, opened in 1909 and closed in 1983. It moved to Gwacheon with a new name, Seoul Zoo, which opened in 1984, and is the largest zoo in the country.

Seoul Grand Park’s Seoul Zoo in Gwacheon, Gyeonggi, has been leading the way to set an example for all zoos in the nation, regardless of their sizes.

“Back in the days all across the world, the key function of a zoo was to provide the public with a chance to actually touch animals they didn't get to see in their daily life, and give them some sort of joy from the animal interaction,” said Kim Bo-sook, chief of Seoul Zoo’s Animal Planning Division.

“However, now the major role zoos should take is becoming a place where endangered species can be protected.”

Any form of so-called animal “shows” at Seoul Zoo were halted in 2012, a huge turning point for the facility. It even released the dolphins that had been part of its shows back into the wild. It still offers experiences like feeding rabbits or sheep, but as part of educational programs to share more about the characteristics of these animals. It has also been certified by the Association of Zoos and Aquariums. It earned its first-ever certification in 2019, and it will be reevaluated every five years. It updated much of its facilities such as expanding the space where the animals are housed.

“The vision we have set is to preserve the respect and love toward a living thing, and the association evaluated how prepared we are for the certification before we earned it,” said Kim.

“Instead of just watching animals in videos at home, looking at animals that actually move around and make noises as well as smelling the feces of them are all a form of interaction with animals which is more effective for one to remember what the animals are like.”

It was the public which pushed for such change of behaviors of regional and private zoos and aquariums.

“Sometimes the demand from the public changes the tide in what’s provided in the market,” said Ko Hyun-sun, an animal rights activist working with a group named Kara, adding that backlash from animal lovers on social media has forced large corporations and regional governments to reevaluate their practices.

While big name zoos and aquariums are taking the first step, the sluggish change from smaller zoos scattered across the country still worries many animal rights activists. Geoje Sea World in South Gyeongsang still operates programs that have humans, both children and adults, ride Beluga whales and dolphins, and many other cafes themed with certain fauna, such as cats and dogs, are also questioned about whether they provide proper care.

For parents wanting their children to experience a variety of animals, Ko expects advancing augmented reality technology can be a substitute. Youtube channels that show the jungle in real-time and underwater marine life can also satiate the desire to see how animals spend a day.

“It will be more fun to watch how different animals communicate with one another, instead of looking at one type of animals in one cage and a different one in another,” said Ko.