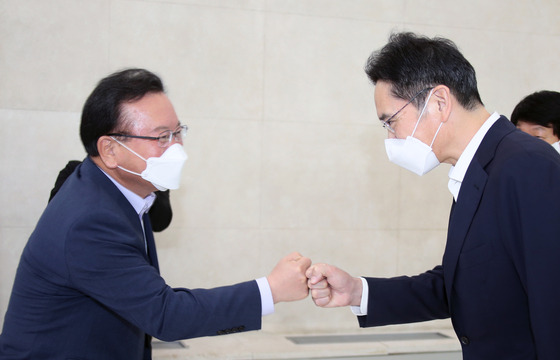 
Samsung Electronics Vice Chairman Lee Jae-yong pledged to create a further 30,000 jobs over three years on Tuesday in his first public appearance since being released from prison on parole last month.

The plan was announced during a meeting with Prime Minister Kim Boo-kyum and other politicians.

The move comes after the company released a proposal last month to invest 240 trillion won ($204.9 billion) and add 40,000 jobs over three years.

The new jobs announced Tuesday are linked to Samsung's joint social responsibility programs with the government while the 40,000 jobs will be direct hires by the company.

The programs include funding start-ups with high potential and nurturing more engineering talents through its training program for developing software.

Samsung’s training center called SSAFY, for instance, will bring in a total of 2,000 trainees per year, double of the current 1,000.

“There is no issue more important than youth employment,” Kim said, “I give special thanks to Samsung for the bold commitment.”

Lee is currently subject to an employment restriction imposed by the Justice Ministry, which bars him from working at a public institution or any entity connected with his crime for five years.

The rule made some speculate that Lee may not attend any public event during the period and instead opt to engage in management in a private manner.

His return to management remains highly divisive in both the political and civic society realms with civic organizations voicing concern.

Prime Minister Kim unexpectedly backed Lee’s involvement at Samsung in an interview with the Financial Times this month.

“We should follow legal procedures if they are needed [for his return to management] but it is not an appropriate option to ban his activities when he has already been released [from prison],” Kim said in the interview.