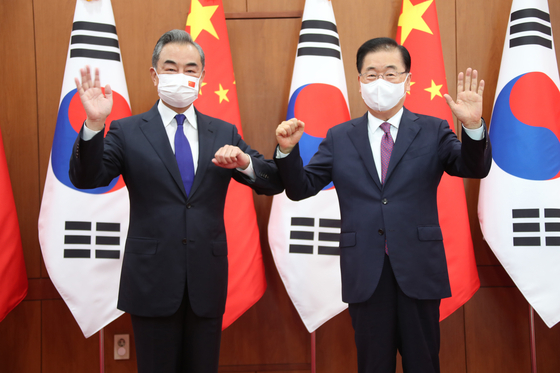 South Korean Foreign Minister Chung Eui-yong, right, and his Chinese counterpart, Wang Yi, pose for a photo ahead of bilateral talks at the Foreign Ministry in central Seoul on Wednesday. [NEWS1]

His two-day visit comes amid intensifying Sino-U.S. rivalry and concerns over North Korea's latest missile provocations as Seoul has been trying to bring Pyongyang back to the dialogue table.

Addressing speculation that South Korea may be asked to join the Five Eyes mechanism involving the United States, Britain, Canada, Australia and New Zealand, Wang told reporters, "I think that is completely a byproduct of the Cold War era. It is already outdated."

The Five Eyes program dates back to U.S. and British intelligence cooperation during World War II and evolved during the Cold War era as a mechanism for monitoring the Soviet Union. A recent U.S. House bill seeks to expand the U.S.-led intelligence-sharing program to include South Korea, Japan, India and Germany. An expansion of the exclusive Five Eyes network could be reflective of U.S. efforts to unite its allies to counter China's growing dominance in the Indo-Pacific region.

On Seoul appearing to tilt more to its ally Washington, Wang said, "One thing is clear: China and South Korea should maintain friendly relations as inseparable neighbors and partners" to seek for a "win-win" situation.

He stressed that next year marks the 30th anniversary of the establishment of diplomatic ties between South Korea and China, noting that the past three decades reaped "real benefits" to both sides and relayed hopes "to continue to develop" bilateral relations.

When asked by reporters about the North's long-range cruise missile tests over the weekend, Wang said, "Of course, I hope that we will all do things that are conducive to peace and stability on the Korean Peninsula. For example, it is not only North Korea but other countries that are also carrying out military action. Thus, we must all work together toward resuming dialogue."

In his talks with Chung, Wang described South Korea and China as "partners that can't part ways," stressing that the two countries have a role to play as "guardians of peace and stability, and facilitators of development and prosperity" in the region.

Wang said the two countries need to strive for a "swift, stable, full-fledged and steady" development of bilateral relations by further strengthening the sense of "community."

He noted the progress in bilateral relations in trade, tourism and people-to-people exchanges since the two countries established bilateral ties in 1992. 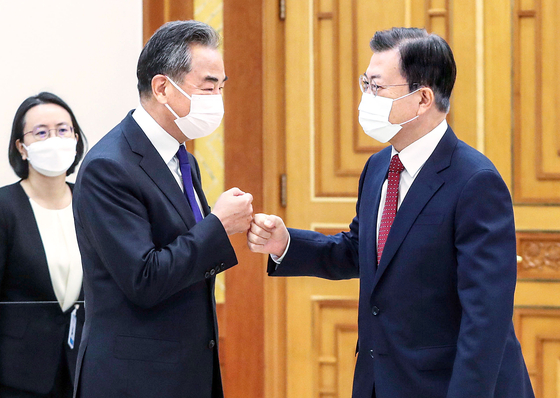 Wang later paid a 40-minute courtesy call on Moon in the Blue House, and the president requested China's "unwavering support" as Seoul makes efforts with the international community toward the "denuclearization and establishment of peace on the Korean Peninsula."

Moon also said he looks forward to developing the "strategic cooperative partnership" between South Korea and China to a higher level, in line with past summit agreements.

Wang said that under the leaderships of Moon and Chinese President Xi Jinping, the two countries' relationship is "maintaining the trend of sound development," adding that that cooperation amid the Covid-19 pandemic has deepened the two countries friendship and served as an "international exemplary case."

Moon expressed hope that the Beijing Olympics "will become another turning point in improving relations with North Korea following the PyeongChang Winter Olympics and contribute to peace in Northeast Asia and the world."

Moon said he hopes that the "Northeast Asia relay," which started with the 2018 PyeongChang Olympics and was followed by the 2020 Tokyo Olympics in July, will conclude successfully with the 2022 Beijing Games. The United Nations General Assembly adopted an Olympic Truce Resolution in November 2017 calling for a détente to serve as an opportunity to establish peace on the Korean Peninsula, in Northeast Asia and beyond.

Wang replied Beijing will try to make the Winter Olympics an opportunity to improve inter-Korean relations but emphasized that "political will" must be a prerequisite for the realization of such a goal, said Park Kyung-mee, spokesperson of the Blue House.

Some experts point out that the mutual respect raised by Wang could refer to points of China's conflict with the United States, such as its policies toward the South China Sea, Taiwan, Hong Kong and human rights in Xinjiang.

On a trip to Vietnam Saturday, Wang stressed that countries should avoid actions that magnify disputes in the South China Sea.

As to the timing of a visit by Xi to South Korea, Wang said it will need constant communication between the two nations so that such a trip could be made "as soon as appropriate conditions are created" with the stabilization of the coronavirus situation, said Park.

Wang wrapped up his visit to Seoul with a luncheon meeting with Chung.