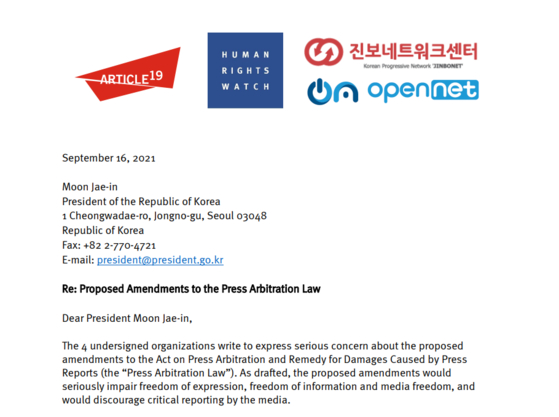 A screen capture of the letter from Human Rights Watch to President Moon Jae-in on Thursday asking Moon to revise the draconian media bill pending at the Assembly. [SCREEN CAPTURE]

“The 4 undersigned organizations write to express serious concern about the proposed amendments to the Act on Press Arbitration and Remedy for Damages Caused by Press Reports,” reads a letter addressed to Moon by the HRW and three other rights groups. “As drafted, the proposed amendments would seriously impair freedom of expression, freedom of information and media freedom, and would discourage critical reporting by the media.”

The amendments, if passed, would impose a harsh five-fold increase in penalties on media outlets that release false or fraudulent news reports, and many in the media believe the law is intended to suppress criticism of the ruling party ahead of next year's presidential election.

HRW and the three other rights organizations took issue with the vague definition of false or fraudulent news reports, which could lead to abuse of the law.

“The vague definition of ‘false or manipulated reporting’ fails to meet the legal requirement that restrictions on expression be formulated with sufficient precision to enable individuals, the media, or internet intermediaries, to know what will violate the law,” reads the letter from HRW. “This phrase ‘information manipulated to be construed as fact’ is particularly vague, and could well be used to penalize opinion pieces, satire, or parody, all of which are protected under international law. The ambiguity of the law leaves it open to abuse.”

It also described the bill’s punitive damages for false reporting to be excessive, and said the bill in its current form could invite manipulators to claim compensation for “emotional distress for even minor factual errors.”

The letter was signed by the HRW; Article 19, an international group promoting freedom of expression; the Korean Progressive Network Jinbonet; and another Korean rights group, Open Net Association. It recommended Moon “fully consult” with media companies, internet monitoring bodies and civic groups “to determine how to revise the bill” to meet the requirements of international law.

“Vague laws that confer excessive discretion can lead to arbitrary decision making and are incompatible with international protections for freedom of expression,” reads the letter. “An independent and diverse media that disseminates a wide range of information and ideas plays a critical role in supporting the functioning of a democratic society.”

Other international bodies such as the United Nations and Reporters Without Borders have called on Korea to revise the draconian media bill.


“The bill is currently under further review by the National Assembly through a consultative body," a Blue House official told the press on Thursday. "Freedom of the press and protection of victims [of fake news and such] are both important. We hope that a national consensus can be reached through this [review process]."


In August, the ruling Democratic Party used its majority in the Culture, Sports and Tourism Committee, where the bill originated, and the Legislation and Judiciary Committee, which acts as a gatekeeper for bills, to get the bill ready for a full parliamentary vote on the Assembly floor, where it controls an absolute 60 percent majority in the 300-seat legislature.

The introduction of the bill has been delayed to a Sept. 27 National Assembly plenary session after parties could not reach agreement on the bill and international attention grew.