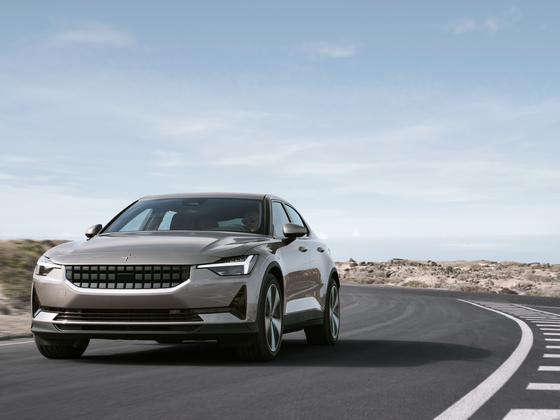 Polestar 2 on the road [POLESTAR]

The Gothenburg, Sweden-based EV manufacturer is planning to open its first Korean showroom in Hannam-dong, central Seoul, in December.

Two more showrooms, one in Starfield Hanam, a shopping complex in Gyeonggi Province, and another in the port city of Busan, are also in the works. The opening date for the two locations hasn’t been confirmed yet.

Starfield Hanam is home to a number of carmakers, including Tesla, Hyundai Motor, Mercedes-Benz, BMW and Jagua Land Rover.


“Although Polestar vehicles will be sold 100 percent through online channels, the number of offline showrooms will continue to expand in Korea in order to provide customers an opportunity to experience and get to know Polestar,” a spokesman for Polestar Automotive Korea said on Thursday.

"The official date of when sales of Polestar vehicles will start in Korea is not confirmed yet."


Korea is one of eight countries Polestar is targeting for expansion this year, after expanding into 10 last year, including the United States, China, Canada, and Germany. Its Korean office was established early this year with Ham Jong-sung appointed as the CEO. Ham has worked for various imported carmakers in the country, including Volvo and Mercedes-Benz.

Polestar is an EV-dedicated spinoff company from Volvo which markets itself as a premium EV brand that focuses on high performance and long ranges.

The brand is often compared to Tesla since both brands are young and do not sell internal combustion engine vehicles. The two companies also take different approach with their offline locations compared to conventional automakers.


Like Tesla, Polestar's offline "Polestar Spaces" don't sell cars but only exist to allow customers to see the vehicles, be briefed about them from "Polestar Specialists" and take test drives. Orders have to be made online.


The Polestar 2 has an WLTP-certified range of 540 kilometers per charge for its long-range version and can reach the speed of 100 kilometers per hour from zero within 5 seconds, according to the company.

Its sticker price starts from $45,900 in the United States without subsidy.