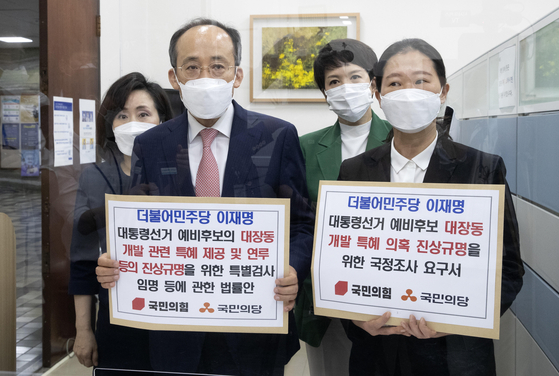 
Conservative opposition parties submitted a bill to the National Assembly Thursday that would launch an independent counsel probe into allegations that Gyeonggi Governor Lee Jae-myung gave preferential treatment to a small asset management company that pocketed tens of billions of won from a development project in Daejang-dong in Gyeonggi during his time as Seongnam mayor.

The party leaders also submitted a proposal for a parliamentary probe, separate from an independent counsel probe, which is usually led by a prosecutor appointed to the case.

Lee, a leading ruling Democratic Party (DP) presidential candidate, has denied the allegations, which his campaign has called “groundless.”

“We resolutely oppose allowing this issue to consume political energy,” said Lee’s campaign manager and DP lawmaker Park Joo-min at a weekly press briefing held at the campaign’s headquarters office in Yeouido on Wednesday, the last day of the Chuseok holiday.

PPP floor leader Kim Gi-hyeon has previously demanded that Lee testify in a parliamentary probe, saying, “If [Lee] continues to avoid the issue, we will propose a special probe into the case as well as a parliamentary investigation after the Chuseok holidays.”

At the center of the controversy is a company called Hwacheon Daeyu, which joined a 1.15-trillion-won ($981 million) project to develop 968,890 square meters (239 acres) in Daejang-dong in Seongnam, Gyeonggi as residential real estate. Since 2019, Hwacheon Daeyu allegedly received a profit of 57.7 billion won on an investment of 49.95 million won.

While in officer as Seongnam mayor, Lee supported the Daejang-dong development project, which he said would create housing for 5,903 families.

The Seongnam Development Corporation held a 50 percent stake in the project, and a consortium including Hana Bank held the other half.

Although Hwacheon Daeyu only held a 1 percent stake in the consortium, it allegedly raked in a disproportionate amount of profit compared to other stakeholders.

The company’s owner, surnamed Kim, is a retired journalist who interviewed Lee in 2014. Kim claimed on Sept. 14 that he has no special relationship with Lee, and that the company actually saw losses in the joint public-private project.

At a Sept. 16 inaugural meeting of a party task force examining allegations against the Gyeonggi governor, PPP floor leader Kim said that it was necessary to investigate the relationship between Lee and Hwacheon Daeyu.

“I want to ask Gov. Lee directly, who does Hwacheon Daeyu belong to?” Kim said at the meeting.

Kim said that Hwacheon Daeyu received a disproportionately large amount of profits compared to its share of investment in the project and that the public has reason to doubt that this was possible without the company benefitting from some kind of preferential treatment.

Another stakeholder, SK Securities, which held a 6 percent stake, received profits worth 346 billion won, he noted, and allegedly had links with the Hwacheon Daeyu owner.

In contrast, the city-owned Seongnam Development Corporation, which holds a 50 percent stake in the project, reportedly only received 183 billion won in profits over the past three years.

At the same time, Kim said that if there were questions that needed answering, an immediate investigation would be more appropriate than a parliamentary probe.

Kim also argued that it was not fair to demand answers from Lee about a project in which the dividends were not determined by the governor.

“After the 2010 Lehman crisis, the real estate market plunged, and most property remained unsold while many development plans were canceled,” Kim said.

“The [Daejang-dong] project was designed so the city of Seongnam would recover 450 billion won in profits, with 180 billion won going to private sector developers. It is not reasonable to ask Lee Jae-myung to take responsibility for unpredictable, additional profits reaped by private companies that were caused by market fluctuations.”

Campaign manager and DP lawmaker Kim Byung-wook argued that the Gyeonggi governor’s choice to create a mixed public-private development project was the “best choice” at the time “considering the outlook for the domestic real estate market."