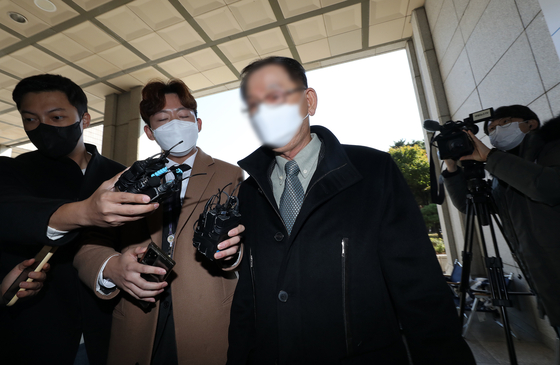 
A former president of Seongnam Development Corporation added fuel to the allegations surrounding the Daejang-dong development scandal by saying Monday that he stepped down from the city-owned company under pressure from then-Seongnam mayor Lee Jae-myung.

In an interview with the JoongAng Ilbo on Monday, Hwang Moo-seong, who served as the first-ever president of Seongnam Development Corporation, said that he understood his resignation in 2015 was the desire of now-Democratic Party (DP) presidential candidate and then-Seongnam mayor, Lee Jae-myung.

Lee was the mayor of Seongnam from 2010 until 2018, when he was elected as Gyeonggi governor, a post he held until Tuesday morning.

Hwang on Monday also released a recorded conversation between himself and Yoo Han-ki, head of the construction development team at the company, which took place a week before the public offering for the development project in Daejang-dong, Seongnam, just south of Seoul in Gyeonggi.

In one of the recordings, which was released by the office of National Assembly lawmaker Kim Eun-hye, Yoo can be heard telling Hwang to submit his resignation letter.

In comments that seem to implicate Lee, Yoo also told Hwang that he is “too naïve” and that the resignation was the “order of the mayor.”

In another recording, Yoo can be heard adding that the people who demanded Hwang’s resignation included Jeong Jin-sang, then-head of Seongnam city’s policy bureau, and Yoo Dong-gyu, then-head of the planning team at Seongnam Development Corporation.

Yoo Dong-gyu would go on to serve as acting president of the public company following Hwang’s resignation.

In response to the new allegations that he applied pressure on Hwang to resign from his post at the company, Lee said on Monday, “Most of them don't seem to be true at all.”

He added, “I remember being disappointed when former president Hwang quit.”

Jeong also denied the allegations, saying, “I never discussed Hwang's job with anyone.”

In the interview with the JoongAng Ilbo, Hwang said that he believed Yoo Han-ki acted in accordance with Lee’s directives to get him sacked.

According to Hwang, the conversation took place on Feb. 6, 2015 — the same day that small asset management company Hwacheon Daeyu was incorporated.

Lee’s former aide Yoo Dong-gyu was arrested by prosecutors on Oct. 3 under suspicion of accepting bribes from Hwacheon Daeyu owner and former journalist Kim Man-bae, in exchange for setting up a profit distribution and shareholder composition favorable to his company.

Hwang’s recordings have fueled further suspicions about Lee’s role in the snowballing development scandal, which has implicated his acquaintances and raised questions about how much he knew about the project’s profit scheme.

If true, the recordings could add proof to the suspicions against Yoo Dong-gyu — that he abused his post as acting president of Seongnam Development Corporation to allow private investors to rake in outsized profits, causing damages to the city.